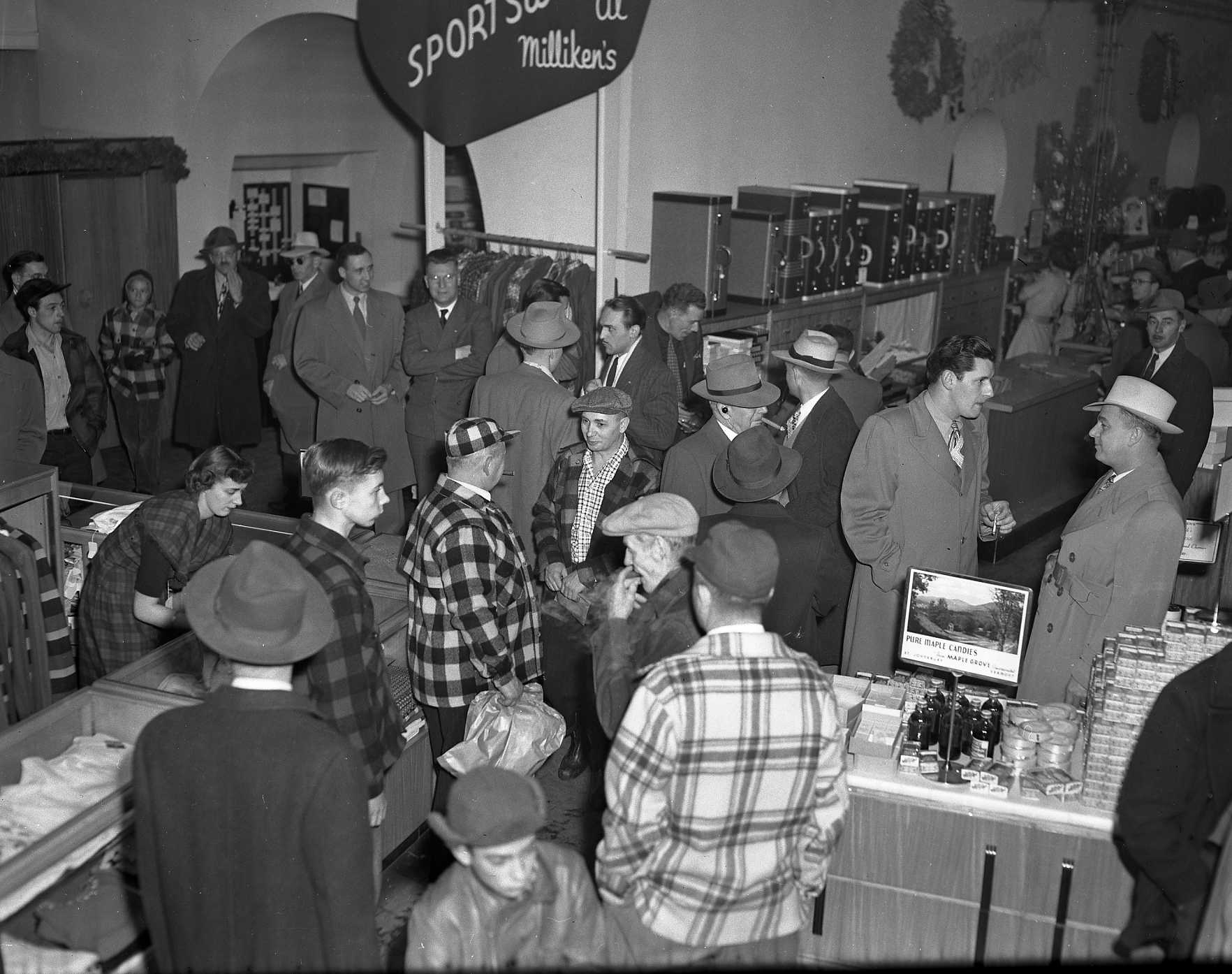 From a downtown Santa Claus house to shopping nights to a symphony concert playing Christmas favorites, Traverse City has more than its share of long-standing holiday traditions, some dating back 100 years.

Some traditions don’t even really wait for the holidays. This year’s annual tree festival, sponsored by the Zonta Club of Traverse City, took place November 12-14, featuring professionally decorated trees and a Yuletide Emporium, the proceeds of which support Zonta and partners community not-for-profit. Zonta president Rhonda Estes said she had been in charge of the festival for 25 years, after taking over from the Auxiliary Osteopathic Hospital in Traverse City.

Upcoming, the Downtown Ladies’ Night and Men’s Night will take place on December 9 and 16, respectively. The concept was introduced as Men’s Night in 1949 (pictured). At the time, apparently, it was assumed that men a) did not know how to shop; b) didn’t want to go shopping and d) certainly couldn’t wrap the gifts. Women who “entered without permission” at this male-only event were threatened with “imprisonment” in the basement of the Milliken department store. Santa Claus would make his appearance as he came down from the tearoom.

If you find yourself in the city center, you can always warm up with a cup of good humor. Grandma Betsy’s Spiced Cider has been a treat for over 40 years at Captain’s Quarters. â€œHell, it probably started in the 1970s,â€ says Maurie Allen, owner of Captain’s Quarters. His wife, Grandmother Betsy, invented the original recipe years ago. It is always available during opening hours right next to the entrance to the men’s clothing store.

â€œPeople look forward to it every year,â€ says Allen. â€œIt’s outside, so people don’t feel like they have to come in and say hello. But many do.

Traverse City historian Richard Fidler has returned to the region’s festivities of all kinds in his book How the Good Times Rolled. The difficult existence of most people at the time meant that there was little time for celebration; 100 years ago most workers worked ten hour days and vacations were almost non-existent. While Christmas was a given, Christmas trees were not: Not all households embraced the idea of â€‹â€‹decorating evergreen foliage in their home.

But Traverse City did – and does. The downtown Christmas tree in the middle of Cass, just south of Front Street, has been a symbol of the season since at least the 1920s. Michelle Hunt, director of parks and recreation for Traverse City, says that the city is spreading the word in a few months, with the hope that someone in or near the city will donate evergreen foliage for the city.

Team Elmer’s donates the platform, truck and crane, and city workers do the rest. â€œWe cut it, load it, drive it through town, cut it, put it in the middle of Cass and decorate it,â€ says Hunt. This year’s one was donated by a West 11th Street owner. The blue spruce is 35 feet tall, has a diameter of 14 inches, and weighs 2,300 pounds.

Music, maestro? Many long-standing musical traditions will return from the pandemic-induced hiatus. The annual sounds of the Interlochen season, with the Academy Wind Symphony and Choir, will take place on December 16 at the Corson Auditorium. Old Town Playhouse traditionally hosts a holiday show, and this year’s Holiday Cabaret takes place on December 16, 17, and 18. .

The Traverse Symphony Orchestra’s long-standing Home for the Holidays is scheduled for December 18-19 at the Corson Auditorium. â€œThe TSO has been presenting a holiday show for over 50 years,â€ says Kedrick Merwin, TSO Executive Director. This year’s show will feature what Merwin calls a Victorian-style orchestra, consisting of string players, a choir, and an organ. â€œWhen planning, we weren’t sure if we could have wind instruments. This will give it a sound of yesteryear. I think it will be a nice touch. It will include traditional dishes as well as a Brazilian holiday music ensemble for a quintet of cello, bass, drums, piano and flute.

If you want to have fun, the annual Messiah Sing will be held again this year at the Central United Methodist Church. The tradition began in 1978, following a conversation between church organist Robert Murphy and Ken Jewell, who led the choir choir. It involves soloists, a small orchestra, choirs and members of the community as a choir.

â€œIt’s like a reunion,â€ explains CUMC Music Director Jeffrey Cobb, noting that it’s not uncommon for multiple generations of families to attend. “To most people, it feels like the start of the Christmas season.” This year’s event will take place on December 5th.

Over the years, some traditions too. The one that no longer exists is the celebration of Santa Lucia. Lisa Johanssen oversaw the celebration, in which a young woman played the role of Saint Lucia / Lucia. She wore a white dress with a red sash and a crown of candles on her head and offered baked goods (traditionally saffron buns and ginger cookies). It was followed by a concert with the flute students of Johansen.

The venue changed over the years from the United Methodist Church to the village of Grand Traverse Commons, with the concert then taking place at Kirkbride Hall. â€œIt has become a community event,â€ Johansen said, noting that her husband Ingemar offered advice, as the celebration is a Swedish tradition. The event lasted from 1986 to 2017, ending on his retirement.

Another tradition that is missing this year is the House of Santa Claus. The downtown tradition began around the same time as the downtown Christmas tree, although it has been moved, from the open space on the sidewalk to the southwest corner of Front and Cass (now home of the Amie Brewery) at State and Cass, with help from the owners of Towne Plaza. Jean Derenzy, CEO of Traverse City DDA, says he will be back next year. In his place, Santa Claus will visit the inner city neighborhoods and his mailbox will be in the State Theater. Derenzy says that Santa’s house and the downtown Christmas tree have been must-sees since the 1920s.