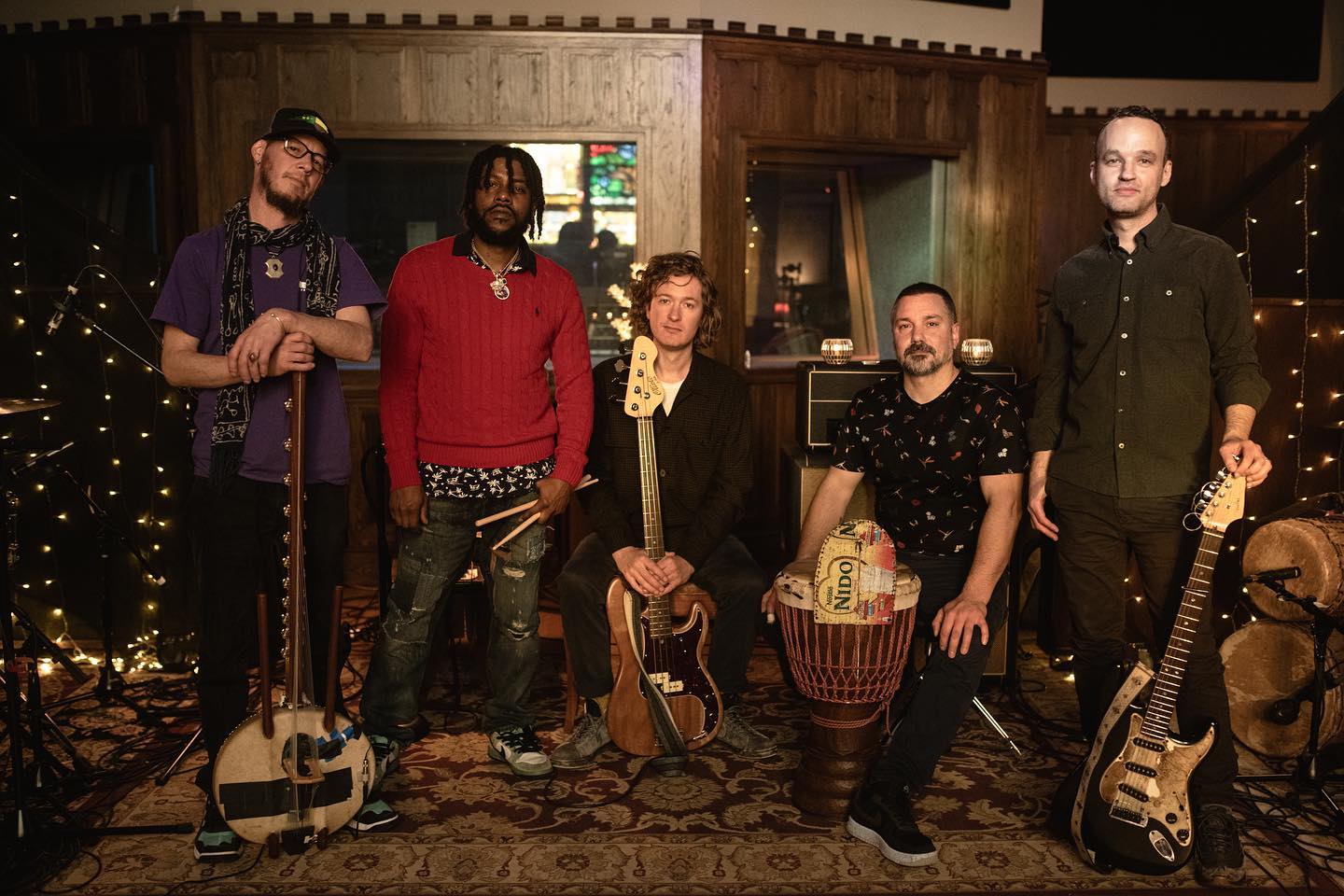 In the mid-2000s, Toubab Krewe was ahead of the game when it came to incorporating traditional African music into modern-era American consciousness. That was before anyone on this side of the Atlantic heard of bands and musicians like Tinariwen, Mdou Moctar and Bombino. This instrumental group from Asheville, North Carolina has done “desert blues” in their own way while infusing it with hints of funk, folk, bluegrass and jazz in an abstract way. The quintet consisting of guitarist and organist Drew Heller, bassist and keyboardist Justin Kimmel, drummer Terrence Houston, multi-instrumentalist Justin Perkins and hand percussionist Luke Quaranta will bring their sound to Park City Hall in Bridgeport on October 7th. Local singer-songwriter Christopher Cavaliere will kick off the evening at 9 p.m. with a wide range of styles.

Quaranta and I had a pre-show chat about how the band embraced their way of making music, traveling to West Africa, playing a variety of hand drums, being part of memorable music festival and the band are looking to release a new album in 2023.

RD: What initially inspired Toubab Krewe’s musical approach? Did you travel to Africa before starting the band or were any of you introduced to the music of the continent?

QL: Originally, the roots of the sound certainly came from our travels in West Africa with a number of our band members growing up in Asheville. I went to school there, so Appalachian string music, early music and that kind of stuff was also an influence, especially Drew [Heller] on guitar and Justin [Kimmel] who plays the kora and the kamele ngoni. They grew up around western North Carolina Appalachian music and these guys both had bands when I first met them when I was in high school. As we developed an interest in the West African style in our late high school years and early college years, it really started with a lot of drum music and also some of the music traditional string. It eventually got to a point where we ended up traveling there during our studies.

We were part of a group that traveled together in West Africa for two months… places like Guinea, Mali and Ivory Coast. This experience of learning traditional music from these countries helped form the root of our sound and we started the band after two of the guys took a four month trip to Mali, specifically to the city of Bamako, in 2004. After they came back from that trip, we started playing a lot of traditional music from there, but through western instrumentation also with drums, bass and electric guitar as well as traditional instruments. We didn’t consciously decide to blend those elements into some kind of jam style or anything, it was really the result of studying the music from there and developing a band around that sound while playing traditional tunes or arrangements of traditional songs. Eventually we started writing in the style so more than anything we let our influences develop the music, whether it was all the West African influences in the instrumentation, some of the Appalachian influences from childhood from Drew & Justin or everything else like rock. & roll, funk, jazz and other aesthetic stuff.

More than it was a conscious decision to mix these styles, our teachers encouraged us to play with our hearts as we have been studying music for quite some time. They wanted us to respect the style while taking creative license.

RD: How were you able to go to West Africa? Was it as part of a college program or did you just want to go and check it out? How did you connect to this particular region?

QL: Like I said, it kind of started with all of us developing an interest in it. A few of us graduated from Warren Wilson College just outside of Asheville and there was a drumming band on campus when we got there. One of the members, who is a good friend of ours, traveled to Guinea on a program at Davidson College, which was our first contact with our professor there. Then our friend returned the following year to study for a month with this teacher in Guinea. We didn’t go to a college program, it was something where we had a connection through the teacher and an opportunity to go live there and study.

Three of us from the drum group went there for a month to learn traditional rhythms and structures. In my senior year the drum band evolved into a drum and dance band at that time and we started performing locally on a regular basis. We did a lot of fundraising, some of it with the help of some college friends, and we raised a lot of money to organize a trip for 14 of us, drummers and dancers, to study there- down in Guinea and the Ivory Coast in 2001. Then a few years later in 2004 we all kept playing after college and after Drew and Justin went to Mali the light bulb went out for start a band in the style of traditional music but also pushing the boundaries in terms of how it blends with other sounds.

RD: You play a variety of hand drums including djembe, conga, dundun, sangban and kinkini. Do each require a different approach or are they relatively the same?

QL: They are all somewhat the same. The conga is a bit different while the dundun, sangban and kinkini are bass drums of the djembe set. It’s the bass drums that create the rhythm, and the djembe is the accompaniment and the main instrument, so these four drums are part of the same ensemble. This is the first set I started playing. I play the krin, a log drum that is played on the Guinean coast and in other places. There is also the karignan which is a metal scraper that is indigenous to the Wassoulou music of southern Mali.

RD: It’s interesting to see how the majority of them relate to each other. During the band’s career, you have played festivals such as Bonnaroo, High Sierra, Wakarusa and Festival In The Desert. What do you like the most about being part of music festivals and how do you differentiate the experience of playing in a festival from that of a club or another type of place?

QL: Along with music festivals, they have always provided an environment in which we could thrive. I think there’s a general openness to new styles of music, people can go to a festival to see a specific band or musician and then they’ll see something different that they’ve never seen before. Since we play a unique style of music, I think that’s why we’ve done well at festivals. People were able to discover something new that is rooted in a style of music from a completely different culture, but presented in a way where they can connect certain dots between genres. I also love seeing lots of other interesting bands putting out music I’ve never heard before while meeting friends I know from being on the road.

I think those are some of the really great things about festivals. Being part of Festival in The Desert was life changing, going to northern Mali to see so many musicians and artists who inspired us to start the band was amazing. When we were there, it was the year after the death of Ali Farka Touré and all these great artists from Bamako came to pay homage to him and to perform. A number of them got to see our set too, so that was very special.

RD: Speaking of special experiences, Toubab Krewe took part in a live collaboration at the Manifestivus Festival in Cabot, Vermont in 2010 with hip hop legend Common and Umar Bin Hassan of The Last Poets. Do you remember it at all? How did it come together?

QL: Me, it was a great moment. Our original bassist, David Pransky, hosted the festival on his family’s land and he basically booked Common for it. At the time, we had collaborated with Umar after meeting him in Columbus, Ohio. He happened to be at our soundcheck, he asked, “Who are these guys playing African music?” and then we met, he was really interested in kora and we connected. We invited him to play with us in Asheville for a few New Years shows and he’s on two tracks on our album Live at The Orange Peel which came out in 2008.

He contributed poems on both of these songs, so we had hung out and collaborated with him, he’s an absolute legend. We invited him to Manifestivus and when we realized Common was there, we knew those two had done the track “The Corner” together and we decided to do the song as a kind of live jam. We basically jumped in and joined Common’s band for the song, Umar did his parts, and it was epic. It was really cool to do that, it was sick.

RD: From the videos I saw of the performance, it looked like a lot of fun. It’s been a few years since Toubab Krewe released his last album Stylo in 2018, so can we expect a new record after this upcoming tour that will have you playing at Park City Music Hall?

QL: Yeah absolutely. On this tour we played a good mix of stuff spanning our entire career from our first album. The set right now is a pretty good array of material from across the catalog, but a new disc has been in the works for a while. We’ve done a number of sessions over the last year, we’ve got a bunch of music we’re sitting on and it’s a bunch of different things. I think sooner or later we’ll be looking to release some new music next year, we’re planning to get together to do some more recordings and we’ve written a lot of new stuff that we’re looking forward to releasing very soon.

Will it be one world, or none?