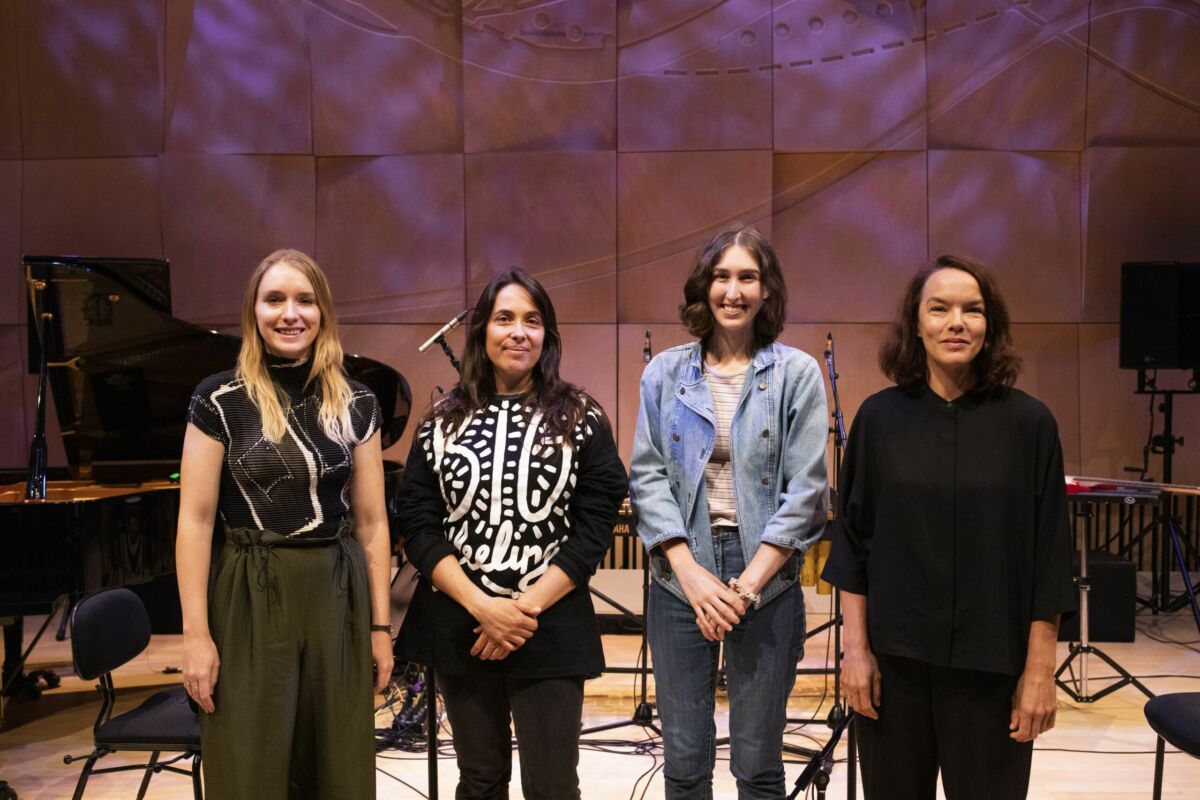 On International Women’s Day in 2017, Summers launched the Women’s manifesto, a blueprint for creating equality for women in Australia that articulated clear goals needed for real change. One was “the right to participate fully and on an equal footing in all areas of public life”, and Summer night specifically addressed to it. After being selected through an open call, composers are supported by performance and composition mentors – including composers Hope, Dr Erik Griswold, Olivia Davies and Dr Damien Ricketson – to develop a new work that will be created in concert. The original plan was to tour the concert across Australia after workshops in 2020, but COVID delays and travel restrictions made that impossible. Finally, the second iteration of the program (the first was in 2018) could be successfully completed and the concert, including five new works, came to fruition.

Summer night opened with Invocation by Aviva Endean (VIC), clarinetist, improviser, composer and performer with a lifelong interest in deep sonic engagement and attentive listening. In this work, Endean uses extended piano techniques to evoke bands of undulating overtones and harmonics from within the instrument using strings, wires, EBows (short for bow electronics; a small device that produces a buzzing sound when held on metal strings) and other tools. It was performed by Smart and Professor Vanessa Tomlinson of Griffith University and Clocked Out Duo, who both served as performance mentors for the composers throughout the project. In the wondrous acoustics of the Primrose Potter Salon (where you can actually hear a pin drop), complex and carefully articulated sound waves shifted in and out of alignment, eventually merging into haunting, quietly ecstatic synchronization.

Hilary Kleinig (SA) is a cellist, composer, curator, producer and educator whose current research also focuses on listening, specifically how people experience and value music in an age of connection. constant to devices and distraction. by Kleinig Ashes to ashes begins with an ethereal and breathless viola part played by Aaron Wyatt while cellist Blair Harris inhabits a sonic undertow. Wyatt and Harris, who were also part of the Summer night the performance mentoring team, are joined by Smart (piano) and Tomlinson (percussion) who turn the work into a hugely propulsive climax, particularly driven by Tomlinson’s deft switching between cymbal and vibraphone. Reflecting on the climatic heartbreak Kleinig experienced after waking up one summer morning with a blanket of ash in her kitchen following a fire that devastated Kangaroo Island, Ashes to ashes is both elegiac and, with the possibility of rebirth, hopeful.

Percussionist, drummer, composer and sound artist Bree van Reyk (NSW)’s musical practice encompasses contemporary classical, performance art and indie-rock idioms; she has worked with artists as diverse as Oren Ambarchi, Laura Jean, Gurrumul and the Letter Quartet. For Editorial Antiphon [after Leonora d’Este], Van Reyk used a field recording of a highway in conjunction with fragments from an Italian book of radical motets published anonymously in 1543. These motets have recently been attributed to Leonora d’Este (1515-1575), a noblewoman and abbess of Ferrara (44 km northeast of Bologna) who was the daughter of Alfonso d’Este and Lucrezia Borgia. By Editorial Antiphon, d’Este’s work comes to us like fractured transmissions from another planet, beautiful excerpts and labored phrases performed using prepared piano, percussion, viola and cello weaving through , off and around the unmistakable sonic modernity of a highway. In this way, van Reyk has created a conduit, a thread that situates her creative practice in the lineage of female composers that is too often cut, broken and lost.

Kate Milligan (WA) is a composer, conductor of the Perth Symphony Orchestra and researcher whose interdisciplinary practice incorporates sociology and musicology. son of insomnia is a response to certain late works by Louise Bourgeois who, as an elderly woman, contemplates the passage of time. son of insomnia, too, as Milligan puts it, “rejects the temporal linearity of the musical staff, throwing the performer adrift in time as in the white hours of the night”. Dreamlike and textural, sonic threads are coaxed by viola (Wyatt), cello (Harris) and prepared piano (Smart) that shimmer in space as Tomlinson switches between percussion and the use of an EBow to extract harmonics from an electric guitar. As an evocation of this otherworldly state, son of insomnia works impressively, never losing its internal logic as it fleetingly moves through time.

Pianist, composer and orchestrator Frankie Dyson Reilly (QLD) is particularly concerned with the relationship between sight, sound and color. His work is inspired by native landscapes, visual arts, flora and fauna, and the highly visual nature of his practice has resulted in commissions for film and game scores. Plumage is an impression of the Bunya Mountains, which are of particular significance to the First Nations peoples of BunyaBunya land, including the Wakka Wakka, Jarowair and Barrumgum peoples. In Dyson Reilly’s musical landscape, dawn is followed by journeys through the trees to witness the vibrant plumage of birds and the playful antics of wildlife, with lush strings, rumbling percussion and splashes of piano color.

Plumage closes this exciting window into the future of composition and is followed by the presentation of celebratory bouquets to the composers whose work was premiered at tonight’s concert following rigorous workshop and mentorship. . With results of this caliber and variety, the next iteration of Summer night will certainly be awaited with enthusiasm.