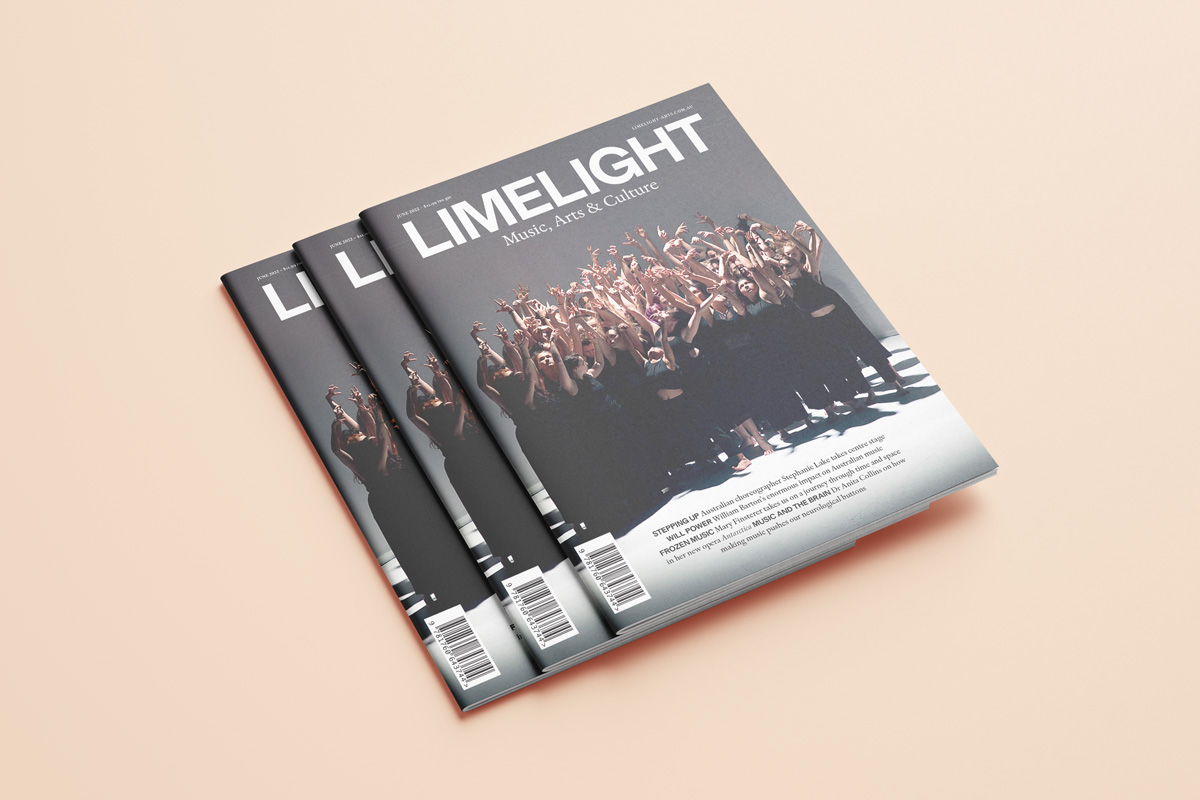 This month’s cover features a striking image of Stephanie Lake’s epic dance work Colossus, which premiered in 2018 and is now played around the world. As Deborah Jones discusses in her feature film Step Up, Lake is now at the top of her game and in high demand. Her latest contemporary dance work for her own company, Manifest, premiered at this year’s Adelaide Festival and now has a season at Melbourne’s RISING Festival. On top of that, ballet companies are starting to call. Jones talks to Lake and his regular partner and collaborator, AV artist Robin Fox, about how it feels to have happened.

Step Up by Deborah Jones

William Barton had a huge impact on Australian music. In our second feature, Will Power, Steve Dow talks to the didgeridoo virtuoso and composer about his burgeoning life and career, as well as the many projects he has in the works, including a new opera about the former footballer Adam Goodes. Dow also speaks to music leaders including Deborah Cheetham and Simone Young – who will conduct a new Barton composition when the Sydney Opera House concert hall reopens – about Barton’s importance.

Will Power by Steve Dow

Many composers have written music inspired by the vast frozen landscape of Antarctica, including Ralph Vaughan Williams, Peter Maxwell Davies and Australian Nigel Westlake. Now Mary Finsterer has written an opera called Antarctic. In our third feature, Frozen Music, Jeremy Eccles chats with Melbourne composer and librettist Tom Wright ahead of the opera’s world premiere at the Holland Festival in June, where it is co-produced by the Sydney Chamber Orchestra and the Dutch new music ensemble Asko |Schönberg.

Why does music make us feel so good? In our fourth feature, Music and the Brain, neuromusical educator Dr. Anita Collins – who many will remember as the on-screen expert in the ABC documentary don’t stop the music – explains what happens in the brain when we listen to music and how fireworks actually explode when we play an instrument or sing together.

Music and the Brain by Dr. Anita Collins

Peter Tregear has written about the winds of change at Opera Australia, which recently appointed a new Chief Executive (Fiona Allan) and is currently looking for a new Artistic Director to succeed Lyndon Terracini, whose contract expires at the end of 2023. Treager argues it’s time for the company to launch a new vision, place more emphasis on Australian repertoire and singers, and consider whether Australia is best served by having a national opera company.

Paul Ballam-Cross interviews British-German violinist Jack Liebeck about his first program as Artistic Director of the Australian Chamber Music Festival, taking place in Townsville in July/August. Ballam-Cross also wrote this month Cutting edge chronicle on the music of the Franco-Greek composer of Romanian origin Iannis Xenakis. Born a century ago, the music of Xeanakis remains as stimulating, daring, disconcerting, hypnotic and avant-garde as ever.

Cover of the June 2022 issue of Limelight

In this month Player column, concert pianist Stephanie McCallum writes on the Érard piano and explains how she and Erin Helyard recorded and performed live on an 1853 Érard. Jenna Breen, who plays French horn for the Seattle Symphony, talks about her joy at joining the Australian World Orchestra in 2022; and Meow Meow, which performs at the Adelaide Cabaret Festival in June, is the subject of this month’s show My music column, revealing his eclectic tastes in music from Piazzolla and Mahler to Nina Simone and Radiohead.

In this month SoapboxGuy Noble discusses our obsession with inventing euphemisms for death, and asserts that we will only be truly dead when everyone who knew us is “dead”, while in the holy cow, Diana Simmonds says it’s time for aging audiences to put their old-fashioned opera demands to pasture.

As usual, there are many other things to enjoy, including that of Clive Paget On the file in which he discusses the latest and greatest classical recordings and reviews of The Australian Ballet’s Kuntskamer and Simon Tedeschi’s new book Fugitive. Enjoy!

A subscription is required to read the June 2022 issue of limelight. All purchases include the chance to win tickets and accommodation to see Maestro Zubin Mehta conduct Strauss with the Australian World Orchestra. Plus, for a limited time, receive a free six-month digital subscription to share with a friend with annual print subscription purchases.