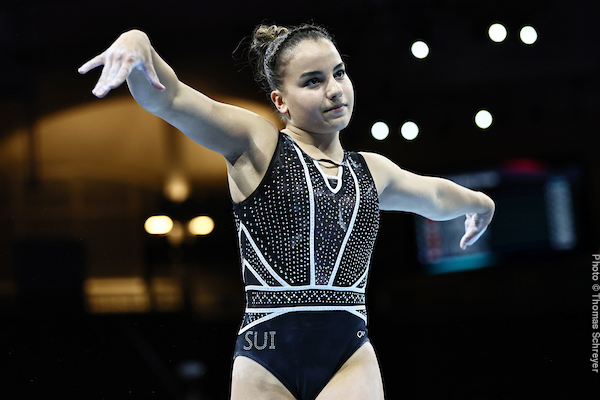 Swiss Anina Wildi: ‘I want to bring my hard work from the gym to the competition field’

Although a Swiss gymnast Anina Wildi will be competing without full squad support at the World Championships in Liverpool later this month, she plans to thrive in the competition and share what she considers her “breathtaking experience” with her loyal teammates who are waiting for him at home.

Wildi is particularly keen to perform well at Liverpool, having missed last year’s Worlds in Kitakyushu due to a pelvic injury she picked up while training there.

In this International Gymnast Online interview, optimist Wildi details her goals for Liverpool, her newly found joy in gymnastics and the harmonious spirit she is enjoying with her Swiss teammates.

I’M GOING: You haven’t been to Worlds since 2018, so what are your hopes and goals for Liverpool?

AW: It is a great honor for me to compete in the world championships. Last year was one of my toughest years. I really fought to get back to the same level as before. I think it worked pretty well and I can’t wait to see what the future holds.

But right now I’m really focusing on world championship routines and four out of four events. I just want to bring my hard work from the gym to the competition field.

I’M GOING: How have you grown as a gymnast since the 2021 Worlds in Kitakyushu, where you were unable to compete due to your pelvic injury?

AW: I have grown so much mentally but also physically. As I said, this past year has been very difficult because I was so ready for Worlds in 2021. But instead I had to go back to the gym on crutches and with three months of rehabilitation. Then I got to sit and watch the other girls on my team practice, pitch new skills, and bond with the new coaches. It was very hard for me. I really needed to take a step back. I had to remember how to focus on whatever made me happy. I talked a lot with Wendy about my mental state and she helped me. Now I really enjoy every second in the gym with my team and appreciate the little things. I’m also stronger and can do harder skills now. The American conditioning has paid off!

I’M GOING: Racing in Liverpool will bring you a particular challenge since you won’t have a full squad to back you up. How do you mentally prepare for this situation?

AW: At the beginning, it was really hard for me. We worked so hard for the Europeans as a team and we were totally ready to show everyone our improvements, but it didn’t work out in the end. (The Europeans’ top 13 teams qualified for Liverpool; Switzerland placed 18th.) So going to Liverpool on my own is very difficult, but it’s also a great opportunity for me to compete with the best gymnasts around the world, to learn something new and use it as motivation for future competitions.

I’M GOING: Your national team is under new management. What are some of the positive changes you’ve experienced since Wendy took over?

AW: I have experienced a lot of positive things in recent months. First of all, we have a much better team bond, even just us girls. We encourage everyone and we help each other in difficult situations. But also with the coaches. I really feel like I can just be me when I’m around them. I have a very close but always professional relationship with all my coaches, especially Wendy. I wouldn’t be at the Worlds without her! She taught us to love our sport again.

I’M GOING: Who coaches you on which apparatus?

I’M GOING: How do you handle the responsibility of being the sole representative of Swiss women’s gymnastics in Liverpool?

AW: I don’t want to pay so much attention to myself because I know that the girls from Magglingen are working hard to have a team on the competition field again. I want to show the world that Switzerland is also a gymnastics nation and that we can have a great future! In the end, I will really try to take all the impressions of Liverpool home and share my positive and mind-blowing experience with my daughters.

I’M GOING: We understand that you play musical instruments. What instruments do you play, and what particularly intrigues you about these instruments?

AW: I played the violin for 12 years, but had to stop when I moved to Magglingen, the national team’s training ground. It was the perfect balance for me between school and practice. All of my four older siblings played instruments and played sports so I decided, mostly because I’m the youngest, that I wanted to do that too. It helped clear my mind and calm me down. Now I play the piano to relax.

Other recent International Gymnast Online articles on Swiss gymnastics include:

OLGA star Anastasia Budiashkina: ‘I thought everything would be real and alive’

Swiss Stefanie Siegenthaler: “Each competition tells its own story”

Giulia Steingruber: “I wanted to say goodbye in a good mood”

The Swiss Hegi confident, even if “the near future is unknown”