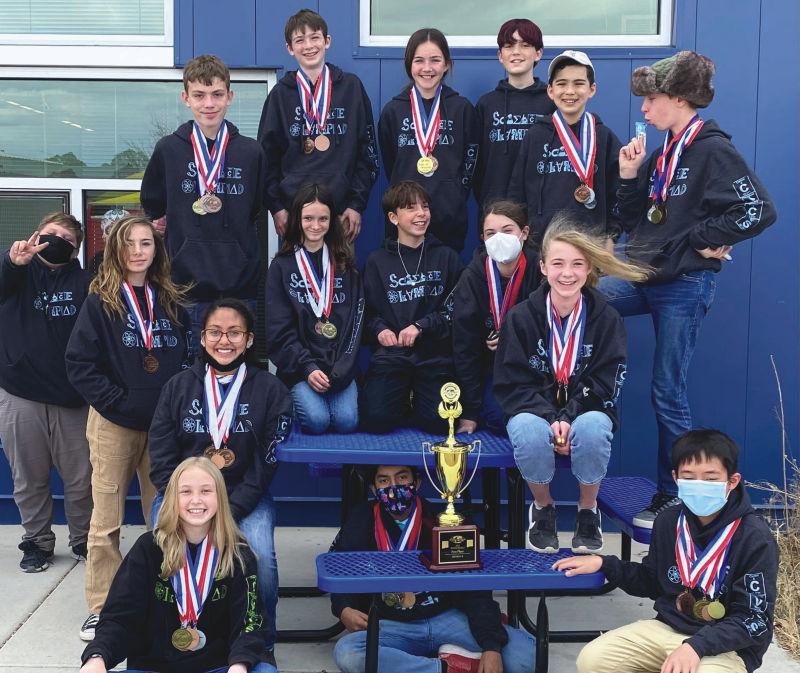 The Cottonwood Valley Charter School Science Olympiad team rallies around their state championship trophy. The team will now compete in the national final at Caltech in May.
Photo courtesy of Tommie McSherry

Weeks and months of preparation for the New Mexico Science Olympiad State Finals paid off for Socorro STEM students who put on an impressive display at the annual event at New Mexico Tech the February 25 and 26.

Daniel Bowles and Anastasia Zagrai of CVCS work on their trebuchet before the competition.
Photo courtesy of Tommie McSherry

“After spending last school year largely in isolation and not participating in SciOly at all, we really enjoyed our season this year,” McSherry said. “It was great to see students coming together again, in person, enjoying each other’s company and sharing an enthusiasm for science and engineering.”

McSherry congratulated the students for their commitment.

“Kids put a ton of effort into preparing for competitions by studying and building,” she said. “For the past few weeks, we have spent four to seven hours practicing after school and many students are also studying from home.

“I have awesome coaching support from Greg Spitz, who supports our builders (students participating in the bridge, mousetrap car, trebuchet, mission possible and wright stuff), and Denise Gilson who helped students design, build and tune a musical instrument,” she mentioned. “They decided to build a xylophone.”

There were 21 teams from four regions participating in the High School Division, and Socorro High School took third place overall with a respectable score of 114. Cueva High School came out on top with an overall score of 83, and in second place Albuquerque Academy finished with 92.

The New Mexico Science Olympiad began in 1986 and is hosted annually by New Mexico Tech. This inter-school academic competition consists of individual and team tests for which students prepare during the school year.

Each team can have up to 15 members, with two “intelletes” competing in most competitions. The two winning teams, Cottonwood Valley Charter School and La Cueva High School, will represent New Mexico at the 38th Annual Science Olympiad National Tournament hosted in partnership with the California Institute of Technology May 9-14 in Pasadena, Calif., and throughout a virtual format.