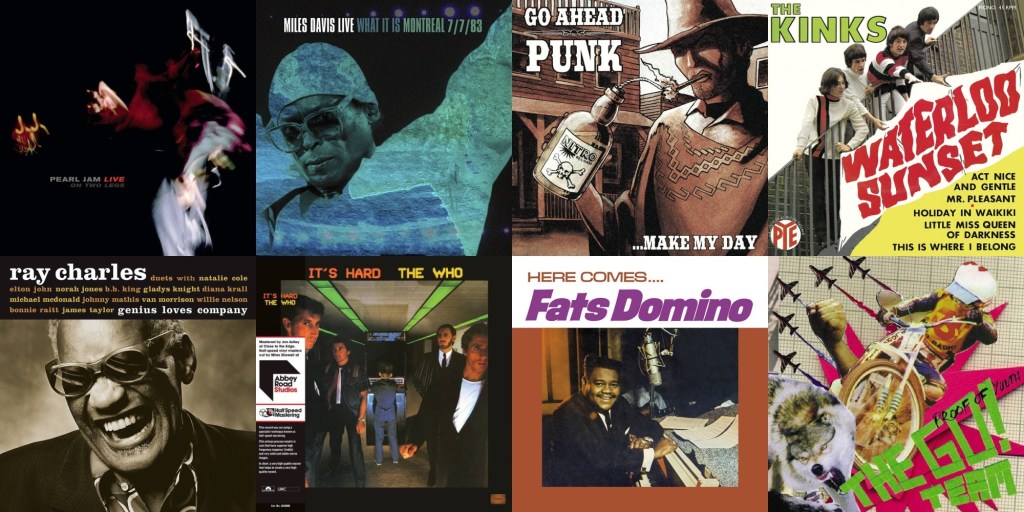 There was an official Record Store Day this year, and it took place as usual at the end of April. Yet, due to the unpredictability of the Covid-19 pandemic, the organizers put a contingency plan in place, which is how we got to “Record Store Day Drops” this weekend.

One of the main reasons for what turns out to be an addendum to music lovers’ vacations is the delay in manufacturing, shipping, etc., essentially getting the music from the pressing plant to the listeners’ turntable. RSD Drops serves as a backstop for street dates for titles that are slated to be part of the Record Store Day celebration in April, but for a number of reasons beyond their control were unable to hitting stores two months ago. In fact, some were slated for April until just days before it became clear they wouldn’t hit stores in time.

The Record Store Day Drops pit isn’t quite as deep as the main event, but there’s still a strong slate of tracks for discerning vinyl listeners when they hit your favorite participating record store, including a full list can be found on recordstoreday. com.

Here are some of the best for rock and roll fans to keep an eye out for that will be “dropping” this weekend.

One of the most popular and commercially successful albums of Ray Charles’ illustrious career, “Genius Loves Company” #1 on the Billboard 200 and won 8 Grammy Awards, including Album of the Year and the record of the year in 2005. It sold over 200,000 copies in the United States alone in its first week of release and went on to achieve triple Platinum status. The duo album features collaborations with some of the biggest names in music like Norah Jones, James Taylor, BB King, Van Morrison, Willie Nelson, Bonnie Raitt and more. The last album Charles ever recorded was a two-LP set limited to 2,000 copies.

This double LP features one of Miles Davis’ last great bands with John Scofield on guitar, Bill “The Other Bill Evans” Evans on saxophones, flute and electric piano, Darryl Jones on bass, Al Foster on drums and the percussionist Mino Cinelu. Miles was back in stunning shape when he took the stage at the St-Denis Theater during the Montreal International Jazz Festival in July 1983, and this eye-opening performance was lovingly mixed and mastered for his very first vinyl release. for Record Store Day. , with 10,000 copies pressed.

Fats Domino was a true pioneer of rock ‘n’ roll, evident when he was declared “the true king of rock and roll” by Elvis Presley. “Here Comes…Fats Domino” is brilliant piano blues pop from Nashville with countrypolitan vocals and was his first album recorded outside of the Imperial label in over 13 years. Originally released in 1963, re-released again in 1975 and not since – and never released on colored vinyl until now – it comes on heavy purple blank vinyl in individual purple hand numbering limited to 1500 copies.

The 15th anniversary of The Go! The team’s classic second album, “Proof of Youth,” is being put down for the first time since 2007. The LP goes from bubblegum pop to white noise in the blink of an eye. This time, the British indie rock band brought a band of glorious misfits to the party, including Public Enemy legend Chuck D, the original Double Dutch Divas, Maryland’s Rapper’s Delight Club, Marina de Bonde Do Role, Solex based in Amsterdam and Washington DC. Frederick Douglas All Star Cheer Team. Now reissued on a limited edition bubblegum vinyl, plus a bonus flexi-disc, and limited to just 900 copies.

This year marks the 55th anniversary of the Kinks’ classic single “Waterloo Sunset.” To celebrate comes this 12-inch EP, which features a total of six songs with artwork from the track’s original 1967 French release. All songs on the yellow vinyl single, limited to 3,150 copies, are mono and remastered.

As Pearl Jam’s first true concert album, “Live on Two Legs” documents the 1998 US summer tour in support of the “Yield” album. The 16 tracks are pulled from all over the different towns – including a performance of “Red Mosquito” from what was then the Blockbuster Music Entertainment Center across the river in Camden. Limited to 20,600 copies, the collection comes on crystal clear vinyl in double gatefold LP packaging.

Any fan of ’90s punk will surely remember coveting a copy of “Go Ahead Punk…Make My Day,” a classic CD sampler from Nitro Records. Originally released in 1996, the album delivered early cuts from some of the biggest names in West Coast punk. Available for the first time on vinyl, this reissue features 10 high-energy tracks from AFI, Guttermouth, Jughead’s Revenge, The Vandals and The Offspring – including the latter band’s cover of “Hey Joe”, a long-time fan favorite wanted that was previously exclusive to this compilation. Limited to 5000 copies, it is pressed on splatter orange vinyl.

The Who’s ‘It’s Hard’ celebrates its 40th anniversary with this extended two-LP set. Disc one is on orange vinyl and contains a half-speed remaster of the album, while disc two, on yellow vinyl, continues the rest of the LP with additional rare and previously unreleased material. This edition, limited to 6000 copies with illustrations by Richard Evans, is also accompanied by a period poster.

The vinyl of the week will return next week.

How the James Webb Space Telescope will examine stars for signs of Earth 2.0