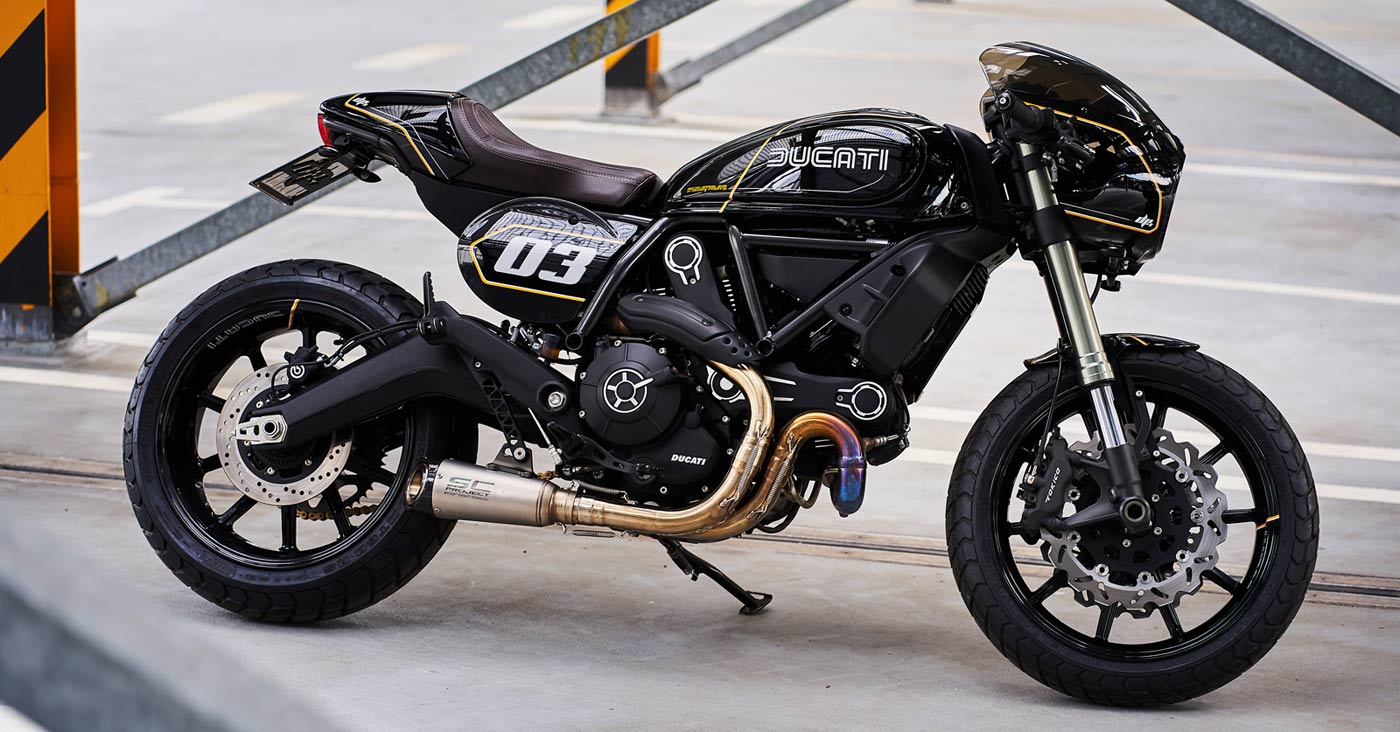 This week’s bikes come in all shapes and sizes. We have a Ducati Scrambler Cafe Racer from Poland, a Suzuki Thunder 125 chopper from Indonesia and a custom mini-bike from a small Hungarian village. Additionally, we take a look at BMW Motorrad’s fourth Pure & Crafted show.

Dixer’s Scrambler actually uses Ducati’s OEM fuel tank, seat, removable rear cover, and side covers, as those are the parts that really look good. But they visually transformed the bike with a new front fairing, mounted on special 3D printed brackets.

The Ducati’s new killer livery is also noteworthy. Filed by Lukasz at LC Grafix, the black and gold paint actually has a holographic effect that appears when the light hits it just right.

But the bigger mod here is one of the more subtle. Dixer swapped the front for Showa forks and the Tokico double disc brakes from a Kawasaki ZX6-R. Dixer makes brake discs which are most often used for stunts, so a pair of these were also used. This Scrambler now has much better stopping power than before and a full range of fork settings.

The bike also has a custom mount for the ABS sensor (as there was nowhere to put it on the Kawasaki forks) and a custom rear sprocket.

It also sports an LED headlight up front and a Dixer Parts license plate holder up front. Lower down is a meaty SC Project muffler, with a dash of Rizoma and Motogadget rooms.

It’s a subtle but well judged set of mods, which also shows just how close Ducati came to getting it right. [Dixer Parts]

Suzuki Thunder 125 by Batakastem workshop One thing that always strikes us on the Indonesian custom scene is the love and level of creativity applied to customizing small motorcycles. After all, in how many other places in the world will you find a chopper built from a humble commuter bike?

This stunner comes from the Indonesian workshop Batakastem and uses a modest Suzuki Thunder 125 as a donor. â€œAs we like to create original concepts,â€ explains store owner Abraham Simatupang, â€œwe combined two styles of classic motorcycles: the bobber and the chopper. “

Nicknamed “Sondang” (which translates to “song”), this little chop only uses the Thunder’s engine and forks. The engine is not original however: it has been upgraded with the four-valve head from a Hyosung RX 125. The carburetor is from TK Racing and the exhaust is a free-flowing stainless steel arrangement.

Batakastem made a rigid frame to house it, topped with a shiny silver finish. The wheels were assembled using custom hubs, stainless steel spokes and 19F / 17R aluminum rims.

At the top is a custom peanut tank, with a handmade aluminum gas cap and gas valve. The spring loaded seat is also unique and sports a traditional pleated upholstery style. At the rear is a chunky rear fender, with a unique short double-rail sissy bar.

Barely an inch on this chopper is not handmade. Batakastem built the narrowed yokes, A-shaped handlebars, foot controls and linkages. There is a classic 4 Â½ inch headlight in the front and an LED side taillight in the rear.

As cheeky as he is gorgeous, Sondang is another reminder to never take your eyes off the Indonesian custom scene. [Batakastem Workshop]

GÃ¡bor LÃ¡szlÃ³ Pick’n’mix mini-bike Nowadays, many parents find it difficult to stick their children’s noses out of electronic devices and into nature, but not GÃ¡bor LÃ¡szlÃ³, whose son and daughter prefer to ride a motorcycle. â€œI find it more useful than video games, so I decided to build a motorcycle for them,â€ Gabi explains.

The family live in a small Hungarian village where off-road trails abound, so Gabi decided to piece together a mini-bike the kids could go wild on. He was working on an extremely tight budget, but the result is a one-of-a-kind motorcycle.

A modified Riga-12 fuel tank (built in Riga, as implied) sits at the top, with a cap made from an old gas cylinder valve wheel. Gabi himself illustrated the character on the tank, then covered it with a layer of lacquer. The Wolf is the antagonist of a popular Soviet animated TV show, which constantly does no good in its pursuit of a hare.

Gabi also cut and installed the rear fender of an MZ ETZ 250. In between are a multitude of laser-cut and drilled parts, like the headlight brackets and the exhaust heat shield. The seat is the only part he hasn’t made himself, but he plans to replace it with something prettier later.

We find it hard to imagine a better childhood than being able to hang out in a forest all day on this little ripper.

Pure & Crafted by BMW Motorrad After an absence of over 18 months, the BMW Motorrad Pure & Crafted Festival returned to the motorcycle show circuit last weekend. Now in its fourth edition, the show combines custom motorcycle culture with live music, sprinkling great food and drink and lifestyle products, in between.

We attended the last Pure & Crafted in Amsterdam in 2019 and had a blast.

This year, the show returned to the city where it was first held: Berlin. It took place at the Messe Berlin exhibition center in the western part of the city and incorporated the open-air Sommergarten of the place [summer garden]. It is estimated that around 6,000 pairs of feet passed over the weekend, including visitors, artists and exhibitors.

The various attractions of Pure & Crafted were spread across the sprawling site and included a merchandise market, with brands like Bowtex and Throttlesnake present. There were also various food and drink vendors, and a special kids’ area, with kid-focused entertainment and a stroller track.

Right next door was the â€œWheelsâ€ arena and the â€œHall of Fameâ€, filled with custom bikes. Regulars from Bike EXIF â€‹â€‹Ironwood, Hookie Co., WalzWerk, JVB-Moto and Renard Speed â€‹â€‹Shop were all represented, alongside breakout workshops like Zillers Garage.

A pop-up cinema screened films about the Lisbon Motorcycle Film Fest motorcycles throughout the event, while the exhilarating Motodrom kept attendees on the edges of their seats.

At sunset, various musical numbers took place on both stages of the event, with Swedish rockers The Hives headlining. Jake Bugg, Kadaver and Alice Phoebe Lou also shared the main stage, with artists like Sofia Portanet, Jupiter Jones and The Picturebookes keeping the secondary stage hot.

Pure & Crafted may be a festival hosted by BMW, but it’s still a great celebration of culture where motorcycles and music intersect. Not being there in person this time was certainly a disappointment, but there is always next year. [Pure&Crafted | Images by Frederick Hafner and Rainer Keuenhof]