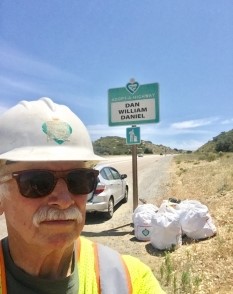 Feb. 28, 2022 (East Sn Diego County) – Dan Russell was a hero in more ways than one. He worked as a firefighter for 27 years with the San Diego Fire Department. But over the past 15 years, he has become best known for his tireless efforts to clean up trash along the local highway and other volunteer work in rural East County. But on Saturday, February 26, Russell died in his sleep at the age of 79.

In an interview with East County Magazine in 2018, Russell estimated how much trash he had removed from local highways over a dozen years. “I would say that I work an average of five hours a day, six days a week. I collect just under 1,000 pounds a month,” he said, adding, “Really close to 10,000 pounds a year; over 100,000 books since I started.

His friend, Bill Jones, hailed Russell as a “true hero”. Not only does Russell volunteer to keep the roads clean, but he also volunteers his time at the Mountain Health Community Center each summer to teach children the didgeridoo, an Australian musical instrument created by Outback Aborigines.

Why did he spend so many hours in his golden years cleaning up roadside debris?

“I’m doing this because I’m tired of our highway being the dirtiest in the country,” said Russell, who was inspired after seeing clean highways in Oregon and Washington. “The goal is to get some gold back into the gold state, especially Interstate 8, because I travel it every day.”

At first, he cleaned as an individual. Then a California Highway Patrol officer pulled him over for illegal parking and threatened to issue a citation and arrest him, Russell recalled.

Then he heard about a freeway adoption program through Caltrans. It started along a section of the Interstate near the Pine Valley Bridge, but also cleared several other highways in our area, including sections of Highway 52 in Santee and Buckman Springs Road in Campo.

“Once a lady stopped and gave me a hundred dollars and said thank you,” he recalled, adding that nowadays CHP officers stop and thank him as well. He also received an award from Cal Trans in recognition of his efforts.

In his spare time, he has helped out at the Mountain Health Community Center, including volunteering to lead a craft workshop each summer for children to raise money for Children’s Aid Services.

“I used to play and make didgeridoos and boomerangs,” he explained.

He started with a boomerang business because he loved throwing boomerangs. (See the video of his boomerang demonstration.) Then he met Richard Harrison, known as “Boomerang Man”, in Louisiana while traveling across the United States “All these boomerangs were hanging on the wall, of different types, and it had a long tube,” he recalls.

Soon Russell closed his boomerang shop and started making didgeridoos. “I went online and found a popular band in San Diego called Indigenous,” he told ECM. He took lessons from a member of the band, then traveled to didgeridoo festivals in Oregon and Joshua Tree, which included Aboriginal people from Australia, where the didgeridoo originated.

As for his trash picking job, his pet peeve was companies that adopted a stretch of freeway for good public relations, but rarely showed up to do the cleanup. He hoped to see more Cal Trans enforcement of the requirements, shorter, more manageable segments available for adoption, and many more volunteers.

In our 2018 interview, Russell said he wasn’t sure who would ever continue his volunteer road cleaning work, which he acknowledged was “quite a commitment”, adding, “It never ends.”

But now his job as a highway cleaning angel has come to an end, and it’s time for others to continue his legacy.

Learn how you can adopt a highway from Caltrans at http://www.dot.ca.gov/hq/maint/adopt/.

Anti-Russian fever grips the world of entertainment, music and sports

How to Add Your Own Music to Apple Music