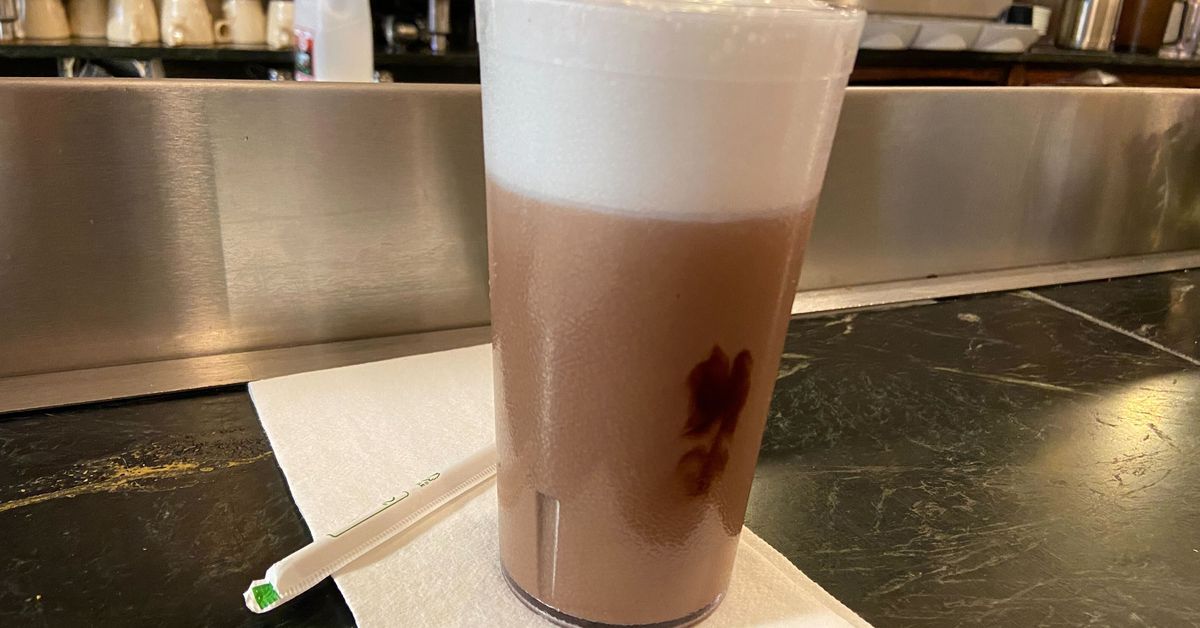 As a born-and-raised New Yorker, whose paternal great-grandparents ran a candy store in Bensonhurst serving egg custards, I never thought to myself, “Where can I get egg custard to go?” And yet, I found myself sucking one out of a plastic coffee cup on a recent rainy afternoon as I balanced an umbrella in my other hand.

We all know how iconic egg custards are, as in South Brooklyn’s Green-Wood Cemetery, music promoter Sid Bernstein – the man who gets points for helping bring the Beatles and the Rolling Stones in America – engraved on his tombstone, “Have an egg custard.”

The love for the egg cream – milk, (probably the necessary) Fox’s U-Bet chocolate syrup, soda water, to create a frothy head, with a much lighter and velvety consistency than a milkshake – ran deep in New York for far longer than I’ve been alive. He is considered the invention of the owner of a confectionery, Louis Auster, whose recipe would have been brought “to the grave.” (Fox’s U-Bet came into play later.)

Over the years, as diners and luncheonettes have become a the threatened speciesegg custards were left on new menus, treated largely as a relic except for places like the Upper East Side’s Lexington Candy Shop or Forest Hills’ Eddie’s Sweet Shop, and other places in the old school still hanging on for dear life in the face of rising rents and changing clientele.

“Honestly, I’m half inclined to suggest that the city’s current mayor introduce tax incentives so that new daycare venues have some incentive to keep this New York signature alive and relevant,” wrote reviewer Ryan Sutton. from Eater NY earlier this year. The mayor has not yet raised his head to respond. But thankfully, a new wave of operators are bringing back custard anyway – now some with modern mixes, while others keep the original format intact.

Lately, I’ve happily seen vanilla and chocolate egg custards at the relaunch of Old John’s Luncheonette on the Upper West Side, an ube rendition at Greenpoint’s Di An Di Vietnamese, and a cafe version at Agi’s Counter restaurant. from Eastern Europe open all day in Crown Height. In the past few weeks alone, the traditional egg custard has reappeared at Court Street Grocer’s S&P team in the former Eisenberg’s in Flatiron. For what it’s worth, my other fellow Eater reviewer, Robert Sietsema, told me he once spotted Lou Reed enjoying one at Eisenberg’s (Lou Reed, of course, even had a song called Egg cream).

In most of the cases, bean coffee in Gowanus, which opened a few weeks ago down the street from Dinosaur Bar-B-Que, is your mundane Brooklyn cafe: step inside and discover bags of Partners coffee beans, avocado toast on sourdough multigrain with furikake and espresso drinks with twists like a pumpkin pie latte. But for $4.50 you can also get an unlikely modern cafe eggcream served either to stay in a glass or, as I did, to go in a plastic cup.

The Beanmonger version, while overly sweet, is, yes, made with Fox’s U-Bet. But, unusually, for quick-serve ease, it forgoes the seltzer siphon bottle — once a staple in soda fountains serving egg custards of yore — and instead uses Topo Chico. The finished product is less sparkling than the classic but is closer to artisanal seltzer water, with salty notes of sparkling mineral water. I went with the regular whole milk, but the cafe also offers it vegan with oat milk. Customers can also get a double shot of espresso.

Although I will always prefer the meditative experience of sitting down to enjoy a traditional egg custard paired with a Reuben, the fast and laid back nature goes back to the roots of custard, and I can see Beanmonger being useful to anyone who are looking for a pick-me-up on a dreary day, or a kid-friendly reward for the many parents in this stroller-heavy neighborhood of Brooklyn. Regardless of the format, I’m excited to see it reappear on more menus and keep the historic drink in my veins.


Register to receive the newsletter

Will it be one world, or none?