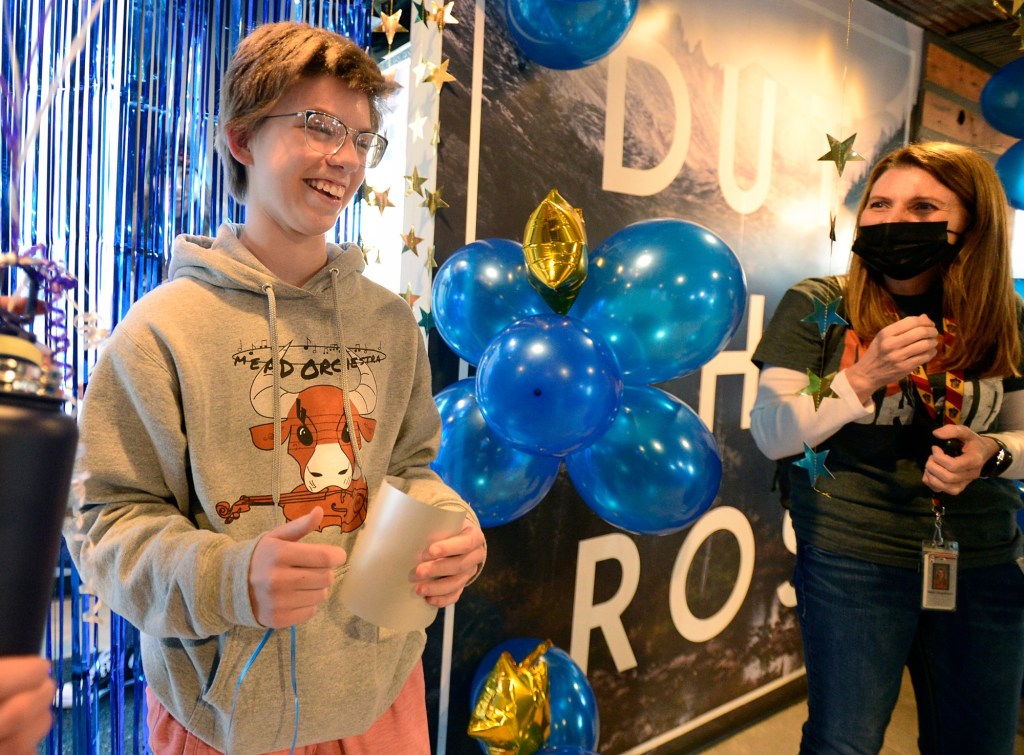 There was more than coffee in store for 15-year-old Raelee Longobricco on Thursday as she walked into Dutch Bros, expecting to grab a drink after school.

Parting the blue streamers at the entrance to the cafe, 933 Main St., she was greeted by family, friends and members of the Make-A-Wish Association. The Mead High School student received a roll of cash that told her she would soon have her wish for an electric bass and a cello. The gift will also come with an amplifier.

As she strode into the room, including the balloons that spelled her name, the Mead High School drum line took over the hall to clap a beat in Raelee’s honor.

Raelee has wanted the instruments since she discovered her love for the cello in sixth grade. Listening to Croatian musicians Luka Šulić and Stjepan Hauser – whose band 2CELLOS transform pop and rock into cello duets – first sparked a love for this versatile instrument.

“Before I started playing, I started watching them,” Raelee said.

Raelee tried to play the flute before taking up the cello, but it was the cello that quickly resonated with her. She liked that it was a no-fuss instrument. She could pick it up and start playing. The teenager plays for the Mead High School Orchestra, where she continues to hone her cello skills.

“We play a lot of classic, but I’ll literally play anything on it,” Raelee said.

In December 2020, Raelee was diagnosed with osteosarcoma, a type of bone cancer. The family discovered the opportunity with Make-A-Wish late last year. Raelee was thrilled to learn she could request instruments, said Robin Longobricco, Raelee’s mother.

Longobricco said her daughter’s passion for the cello has grown since she started playing the instrument.

“She just picked up this cello and for some reason you could tell it came naturally to her,” Longobricco said.

Sarah Grosh, director of community development for Make-A-Wish in the Denver area, said children are referred to the nonprofit through parents and doctors. The association serves children from 2 to 18 years old.

Grosh said the nonprofit hoped to bring joy and excitement to Raelee on Thursday with the surprise.

“We have so many kids waiting for their wish to be granted,” Grosh said. “It’s a great opportunity to celebrate them and give them even more joy and hope in the meantime. Raelee’s wish will tentatively be granted in February. We thought it would be a sweet surprise and a way to let her know it’s happening.

The surprise for Raelee helped launch a Make-A-Wish Colorado’s Kids campaign to be hosted by Dutch Bros. Starting Friday, one dollar from every order will go to the campaign. The fundraiser will take place statewide at each of the 34 Dutch Bros. cafes. Dutch Bros also donated $5,000 to Make-A-Wish, according to a press release from the nonprofit organization.

The passion for music is family. Raelee’s twin brother, Mason, sings in the school choir and her older sister, Mackailee, 18, plays the clarinet.

Raelee said she looks forward to the pleasure of playing anything on her new instruments. Although she hopes to take bass lessons, she said cello music translates easily, so she expects to have some natural aptitude for the instrument.

“It was a lot of fun,” Raelee said of Thursday’s upset.