Three years after their last album, Purgatorio, the metal force of Gothenburg Manimal announced their return with a brand new studio record this fall. Armageddon is slated for release on October 8, 2021 via AFM Records.

Despite the band’s loyalty to traditional heavy metal influences, Purgatorio was an excellent example of modern, avant-garde power metal characterized by musical enthusiasm, exceptional talent and new ideas. As expected from a band who claim Judas Priest, King Diamond and Queensrÿche as major influences on their sound since day one, ManimaL’s new record is an energetic and direct tribute to the music that has inspired them over the past 20 years. years.

But calling Manimal “just” a power metal band, however, is far from the truth according to frontman Samuel Nyman. “We’re more than power metal. It’s our label that put Manimal in the power metal category with our first album, and we understand that perfectly because they had to put us in a genre to guide people. metal to me, it’s bands like Helloween, Gamma Ray and Stratovarius; they have more rhythmic songs, more vocal harmonies. Of course, Manimal has elements of power metal but we are not pure power metal. it’s more than that and I think the new album is a perfect example of that. “

Every single scored for the release of Armageddon proves it. After Manimal shared a first preview of the album with the single “Forged In Metal”, released today, the Swedish quartet released a brand new song, the epic closing track for the album “The Inevitable End” .

“The song represents the more melodic side of Manimal,” reveals Nyman, “with strong harmonies and a catchy chorus.”

The writing of Armageddon songs was again directed by guitarist Henrik Stenroos, considered by his comrades to be the musical brain behind Manimal. And that’s where the secret of the band’s sound than power metal lies. Stenroos listens to all types of music and because of this colorful musical palette, according to Nyman, “he sums up and gets his own ideas, trying to create something he loves himself”. Stenroos has a strong riff-focused approach to Manimal’s music, and the material he presented to the rest of the band for Armageddon were real songs rather than just ideas. As with their three previous records, the quartet worked together to give the songs their final form. “The vocal harmonies Henrik gives me are played with the guitar,” says Nyman, offering an example of their creative process for Armageddon, which was mixed by Manimal bassist Kenny Boufadene in his Studio Meltdown in Sweden. “We’ve been making music together for so many years now that I can almost hear by the way he plays how he wants me to sing. It’s not very often that we disagree in the writing process of songs. ”

“I’m really proud that we managed to create another great album together,” adds Henrik Stenroos. “And it was a team effort. The four of us put so much soul and effort into everything from writing the song to recording, with the result of a really heavy album and great sounding without any filler whatsoever. Fans of our previous work won’t be disappointed. ”

Manimal’s evolution from Armageddon to their debut album, The Darkest Room – released in 2009 – is indisputable. Their composition has become tighter, stronger and more daring, and they have improved in leaps and bounds as musicians. Armageddon will showcase its wide range of sounds heavy as hell, and one that will most likely appeal to the true hearts of the old school and all modern metal fans. 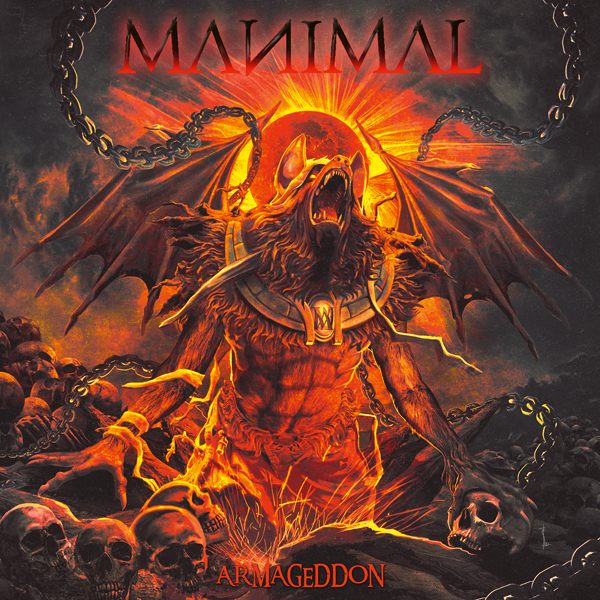