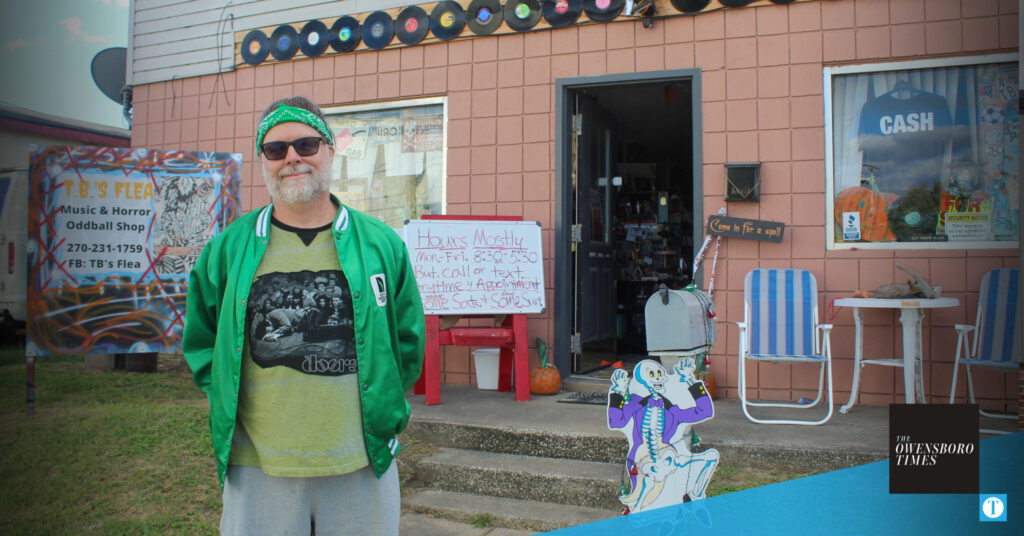 Terry Boone is like his store – a little of this and a little of that mixed together to make an image. He is a self-proclaimed Mr. Mom or Daddy Daycare, spirit animal and early riser who decided to open a showcase to share his memories.

He offers free Pumpkin Spice Coffee at TB’s Flea during weekday business hours, but he’ll also take appointments for people who want to visit outside of those hours.

Opening a business and arranging the merchandise takes time and effort, he said, and so he worked behind closed doors to make it as perfect as possible before it opened.

“It all takes time, effort and money to get a store started and open,” he said.

He researched and worked at numerous flea markets and malls for five years before officially opening Sept. 12 at his location at 220 Hamilton Ave.

“I’m tucked away by Owensboro Grain and Dee’s Diner…you can’t miss me,” he said.

Boone said he has items for “all walks of life”, but specializes in rock and metal music and horror memorabilia.

His love of horror and “scary stuff” is illustrated in posters, masks and trinkets.

“Even blankets – something for everyone, I’m not kidding,” he said.

Drawing on pop culture and heavy metal, his music tracks range from country to rap and even Taylor Swift.

“All of the above and more,” he said.

Although he touts a slow opening, he’s excited about the “nice people” he’s met and is gearing up for Halloween sales to grow his business.

Boone stressed the importance of local shopping if the area is to retain oddity stores.

“Support and shop local stores often… get in and support mom-and-pop places before all the cool stores are gone, never to return,” he said.

TB’s Flea is located at 220 Hamilton Ave. Regular merchandise displays can be viewed on his Facebook page.