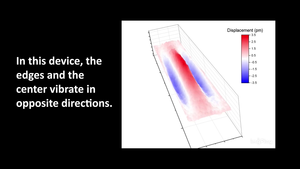 GAITHERSBURG, Md., February 23, 2022 – An instrument that images acoustic waves over a range of frequencies and produces what are called movies of the waves will allow a better understanding of acoustic vibrations. The ability to dynamically measure vibrations in mechanical resonators at microwave frequencies is essential for emerging technologies such as 5G wireless communications and the generation, storage and transfer of quantum states.

However, as 5G networks become prevalent in wireless communications, the challenge of measuring these tiny acoustic waves is about to grow. In addition, the method commonly used to image vibrational wave fields, continuous laser interferometry, has been limited to vibration amplitudes insufficient for these rising technologies.

Developed by a team at the National Institute of Standards and Technology (NIST), the proposed instrument uses a stroboscopic interferometer with femtosecond (fs) laser pulses to optically sample the motion of a resonator under coherent excitation. The instrument combines elements of continuous wave interferometers and pump-probe systems to achieve significantly better resolution and bandwidth than either approach alone, allowing nanomechanical vibrations to be measured at very high frequencies. .

The interferometer’s illumination source is a laser that pulses 50 million times per second, which is significantly slower than the measured vibrations.

The interferometer compares two pulses traveling on different paths. The first pulse passes through a microscope which focuses the light on a vibrating micromechanical resonator; this light is then reflected. The second pulse serves as a reference; its trajectory is continuously adjusted so that its length is within one micron of the distance traveled by the first pulse.

In addition, the slowing down allows acoustic vibrations that oscillate at GHz frequencies to be converted to MHz frequencies. “Switching to lower frequencies removes interference from communication signals typically found at microwave frequencies and allows us to use photodetectors with lower electrical noise,” said researcher Jason Gorman.

Films made at NIST, using an optical interferometer, capture the atomic-scale vibrations of microresonators similar to those found in cell phones. Micromechanical resonators in the frequency domain, measured by an instrument developed by the NIST team, could be used to store fragile quantum information and to transfer data from one part of a quantum computer to another. Courtesy of NIST.

When the two pulses meet, the light waves from each pulse overlap, creating an interference pattern. Subsequent pulses entering the interferometer change the interference pattern as the resonator vibrates. Researchers can measure the amplitude and phase of vibrations based on changes in the pattern. Each pulse is only 120 fs long, providing continuous updates on resonator vibrations.

The laser scans the resonator, samples the amplitude and phase of vibrations across the surface of the device, and produces high-resolution images over a range of microwave frequencies. By combining these measurements, averaged over multiple samples, researchers can create 3D movies of the resonator’s vibrational modes.

Pictures and movies show if a resonator is working as expected. They highlight problem areas, such as where acoustic energy leaks from the resonator, reducing its effectiveness and causing information to be lost. By identifying problem areas, the NIST instrument provides scientists with the information they need to improve resonator designs.

Using the new approach, the researchers measured acoustic vibrations up to 12 GHz with an almost flat femtometer-scale noise floor and arbitrarily fine frequency resolution, while maintaining measurement laser power as low as 100μW. The team believes they may be able to extend the measurements to 25 GHz, which would provide the frequency coverage needed for 5G communications and potential future applications using quantum information. The researchers reported that they could image acoustic vibrations with an amplitude as small as 55 femtometers.