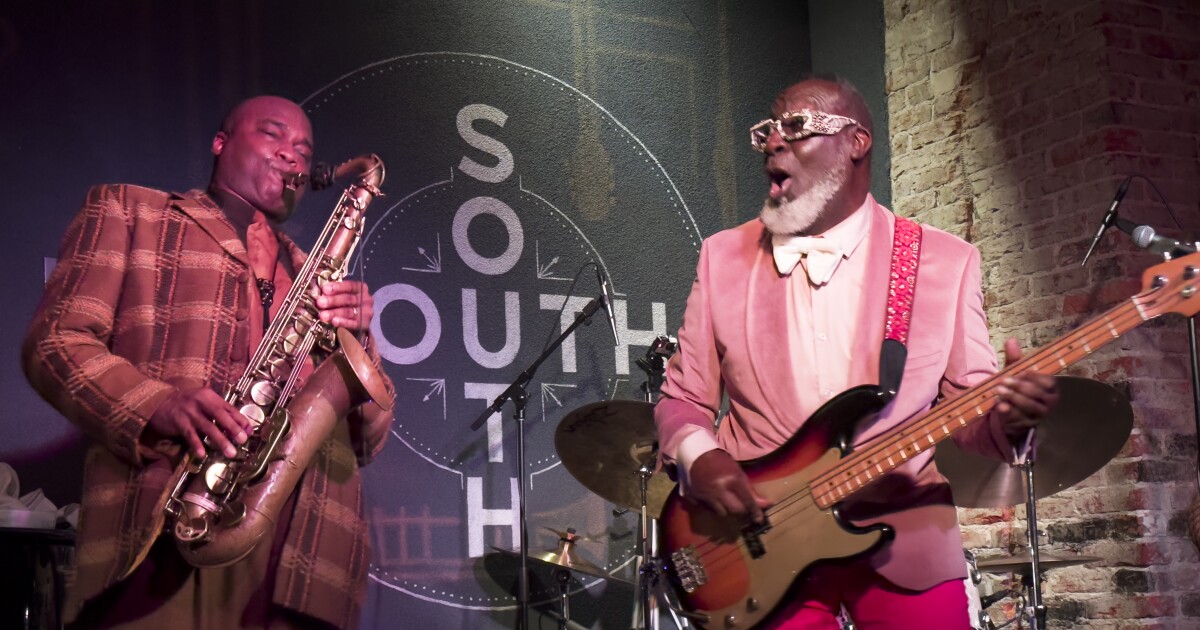 Jamaaladeen Tacuma unleashed a torrent of tone and rhythm from his electric bass at the SOUTH Jazz Kitchen last Saturday night, keeping a sold-out crowd hooked on every note. It was the opening weekend for his Outdoor festival of improvised and creative music — and judging by the reception in the room, audiences are more than ready to follow his post-pandemic funk forays to their natural conclusion.

“As improvisers, we understand the concept of transformation into grooves and styles within a given framework,” Tacuma told WRTI, after the fact. “As I humbly take the lead in these moments, I feel the vibe from the audience and it’s clear as we play what should come next.”

Tacuma’s history with Weston and Carter goes back decades and formed the bond with Carter’s 2000 album. Lying in the cup (with guitarists Jef Lee Johnson and Marc Ribot). This common musical language also set the tone for this formation, presented as the Jamaaladeen Tacuma Quartet.

Dressed as always smartly and armed with his Fender Precision Bass, Tacuma guided the team through a medley of fire-breathing groove. His bass lines sometimes suggested patterns traceable to Billy “Bass” Nelson of Funkadelic or even Larry Graham. But emerging from this groove, a flair for improvisation and a vocabulary that dazzled and surprised the crowd.

Carter, one of the most meticulous and powerful saxophonists of any generation, unleashed a torrent of melodies and sounds representing the history of his instrument.

And while many bands in this setup would employ a pianist or keyboardist, Morelli’s guitar proved to be better suited to the music. Its harmonic underpinning was flexible and forceful enough to allow Carter maximum freedom – and when Morelli stepped forward as a soloist, his rock intensity was central to the band’s sound.

Weston and Tacuma have been tight rhythm partners since their teenage years, when they both starred in Ornette Coleman’s Prime Time. His pace took no prisoners, while supporting almost anything Carter or Morelli put forth. As Tacuma says of the band’s process, “It’s easy to play a full concert without preconceived compositions, but in our improvisations we can sometimes add our compositions as well.”

At a supper club like SOUTH, patrons can sometimes be lulled into passive listening to the splendor of the food. But with Tacuma’s quartet in full swing, even cornbread came second. On Saturday, the Outside Improvised & Creative Music Festival moves to the Painted Bride Art Center at 5212 Market Street — with “Strings and Things,” Tacuma’s trio with guitarist Mary Halvorson and drummer Tomas Fujiwara, likely to get away with it again better in terms of reach and immediacy.

This performance will occur both in person and in VR (virtual reality); admission is $25 (in person) or $20 (VR), respectively, available for purchase here.