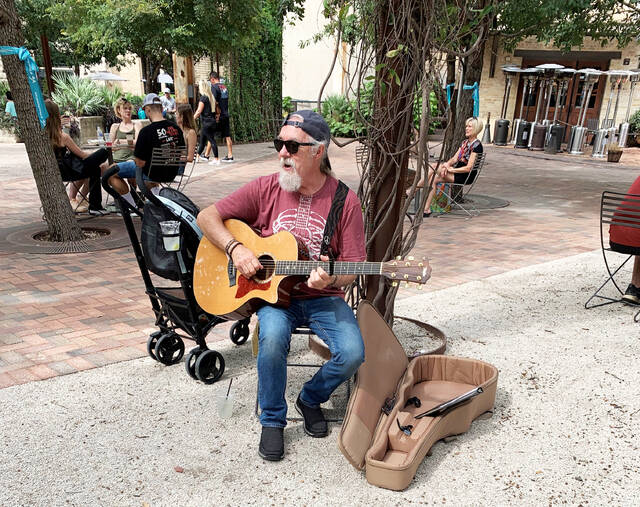 This is the first in a two-part series in Intelligencer examining how the COVID-19 pandemic has affected musicians in Madison County.

EDWARDSVILLE – For Butch Moore, there’s nothing quite like playing live music, and he couldn’t be happier to be back on stage.

Moore, 69, who has been playing guitar for 56 years, is among local musicians who were nearly barred from playing live shows amid the height of the COVID-19 pandemic.

While the pandemic hasn’t gone away, most local sites have reopened and Moore is back to doing what he loves most.

â€œThings really started to take off for me back in April when all the venues started to reopen again and it was pretty much back to normal,â€ Moore said. “Some months I’ve performed up to 24 times and average about 15 concerts a month.”

Moore retired on March 15, 2019, on his 67th birthday, from his position as investigator for the law firm MRFH, which deals with mesothelioma cases.

During a one-year period ending in his 68th birthday, Moore performed 154 concerts. Even before he retired, he typically played 130 to 140 dates a year.

The coronavirus, however, dried up the seemingly endless list of concerts almost overnight.

â€œI retired on my birthday and played five shows over the weekend,â€ said Moore, who said he felt â€œanxious and depressedâ€ after a year with just one. handful of shows. â€œMarch 17, 2019 was an open mic night at the Stagger Inn and the next day it all stopped. “

Moggio, 68, who plays guitar for Robert Perry and the Mojos, is the former owner of Mojo’s Music in downtown Edwardsville. He has been playing guitar since seventh grade and has worked in the musical instrument business for 40 years.

â€œI became the owner of Mojo’s in 2000 and before that I worked for about 15 years for a music store in St. Louis and a store in Alton for two or three years,â€ Moggio said. I sold Mojo’s on the last day of 2018, but stayed part-time for two years as a consultant and advisor before retiring this year.

â€œI haven’t been as affected by (the pandemic) as someone who depends on music for a living. My group is good, we are working on it and we are all about the same age. Only one of the guys is still working full time.

Before the pandemic, Moggio’s group typically performed 40 to 50 shows a year.

Due to COVID, that number has dropped significantly.

â€œWe’ve definitely played a lot less over the past year and a half. In 2020 our last indoor gig was in February, but we played outdoors a couple of times in late summer or fall, â€Moggio said.

â€œWe didn’t play again until this summer when we played outdoors at places like Wild Pickings (in Chesterfield, Illinois), the Loading Dock (in Grafton) and the Boathouse in St. Charles. We also played the bike race (the Criterium) in downtown Edwardsville and the Edwardsville Art Fair, but we won’t be playing 10 shows this year.

Lexy Schlemer, meanwhile, is another local musician who is excited to perform live again.

Before the pandemic, Schlemer performed 15-20 shows per month from 2017 to 2019. That does not include a four month period in late 2018 and early 2019, when her vocal cords collapsed and she had had to undergo surgery and take time off for recovery.

â€œWe had a metal business back then so I could work there during the day and play where I wanted at night,â€ said Schlemer, 33, who lives in Holiday Shores and has been a lifelong native of Edwardsville. â€œBut when the pandemic hit, I was reduced to about two shows a month.

â€œThis year has been very successful, and I have had a lot of concerts. I played a vendor fair at Ink House (the old intelligence office) and played Recess Brewing (in Edwardsville) for the Criterium. I recently had a weekend where I played four gigs and there are at least two gigs every weekend.

For Schlemer, now manager of a law firm and welder next door, life without music is hard to imagine.

â€œMy dad is Phil Schlemer, and my grandfather was Walt Schlemer, and Walt had a band for years in Edwardsville,â€ Schlemer said. â€œThey were still the alliance and he played the double bass. My dad was a drummer and was part of an alliance, so when I was a kid everyone I knew had my grandfather or dad playing at their events.

â€œI started playing the piano when I was 5 and started playing guitar around the age of 12. I was in a family group with my father and 12 year old sister until almost 30 years old. My sister Syd had cancer three times (and is now in remission) and when she had her last fight in 2017, we put the band on hold and stopped playing together.

When the family group broke up, Schlemer became an acoustic solo artist, performing at various venues in the Metro East and the St. Louis area.

â€œThe type of music I play is literally everything,â€ Schlemer said. â€œI’m going from Prince to Johnny Cash, Stevie Nicks, Bonnie Tyler and Janis Joplin. I have that kind of low, hoarse voice and I do soul, pop, country and whatever you can think of.

â€œI played wherever I could, but in 2020 things stopped and opportunities (to play live) were scarce. If you were playing outside it was different, but everything inside was pretty much closed.

Moore considers himself lucky to have had concerts last year, even though they were limited.

â€œIf it hadn’t been for the Broadway Oyster Bar in 2020, I wouldn’t have had anything last year,â€ Moore said. â€œIt kept me going because I didn’t lose a concert there.

â€œEven when they fell to 25% of their capacity, they still booked us two or three times a month. I also did six or seven Facebook Live shows, and I could have done more, but I didn’t want people to think I was doing too much.

In addition to the Stagger Inn and Broadway Oyster Bar, Moore is a regular at Winery at Shale Lake in Staunton, Recess Brewery in Edwardsville (first and third Tuesday of the month), Big Daddy’s in Edwardsville, and Copper Dock Winery in Pocahontas.

â€œNow that everyone is open again and we’re playing music, we’re as back to normal as possible,â€ Moore said. â€œSome places still want people to wear a mask when they go to the bathroom or go to the bar and have a drink and I haven’t seen anyone object.

â€œAt the Broadway Oyster Bar, all staff wear masks, including the bartenders. It’s just courtesy and there’s no reason not to be nice.

Through family visits to Texas, Moore broadened the reach of his musical influence.

â€œI went to San Antonio a few weeks ago to visit my grandson and ended up playing on the streets,â€ Moore said. â€œI also went there and sat down with a friend to play the Riverwalk. I’m going to start playing in the streets again when I get back there because it went really well.

Like Moore, Moggio doesn’t depend on his concerts to pay the bills. But that didn’t make all of the shows canceled during the pandemic any more manageable.

â€œIt’s something I’ve always done, and I do it more for satisfaction than money. We don’t take it lightly and we train pretty hard, â€said Moggio.

â€œIt doesn’t matter if it’s playing music, going to a restaurant or going to a basketball game – everyone wants to get back to normal. For us, normal is to play music. , and we would like to start doing more again. â€