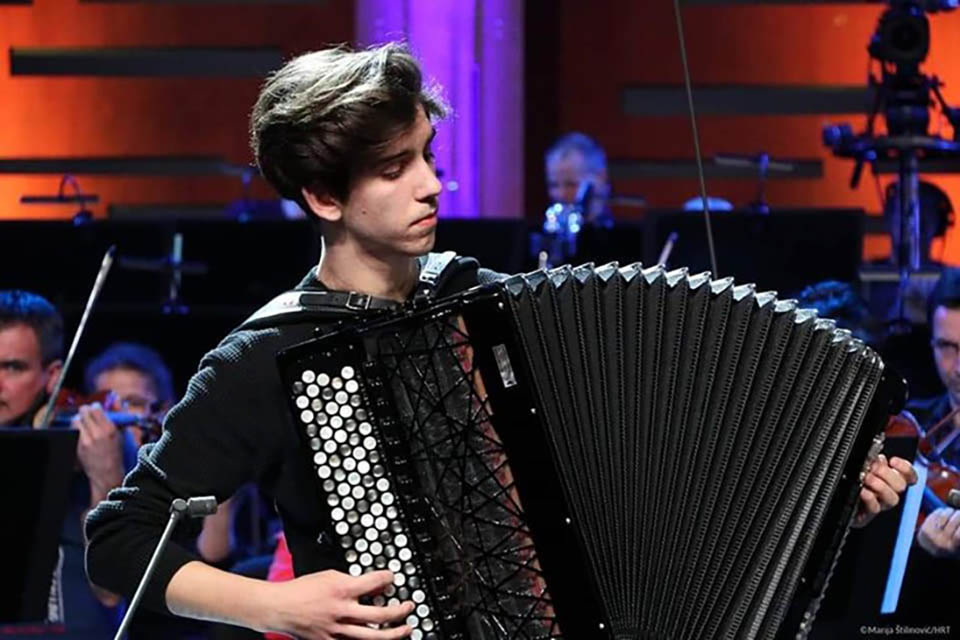 Many years ago I decided to buy a piano accordion, under the impression that being a reasonably competent pianist it would be quite easy to play. I was wrong. The keyboard felt friendly enough, but it was a challenge to play the keyboard sideways without tangling my fingers. Then there were the left buttons to sort. Many accordions use the so-called Stradella bass system, in which the buttons are arranged in fifth intervals: separate buttons for bass notes and additional rows of buttons for major, minor, dominant seventh chords and diminished. So far, quite logical.

The trouble is that when you’re playing the instrument the buttons aren’t marked and anyway they’re completely out of sight so you have to fumble around until you manage to memorize the positions. My biggest problem was remembering to keep pushing and pulling the bellows with my left arm – an action that doesn’t come naturally, especially since your fingers are busy with other things. The accordion is also an incredibly heavy contraption, supported by thick leather straps that go over your shoulders. Compared to the piano, practice is a physical effort.

The accordion is rather loud, which is why it is popular in dance music. Unfortunately, it wasn’t popular with my neighbors who clearly weren’t connoisseurs of accordion music. There were so many complaints that my potential as an international accordion star was never realized. Anyway, I never really understood the bellows.

After its invention in 1829, the accordion was a huge success and it traveled with migrating Europeans to many parts of the world. It was ideal for folk songs and dance music as it could provide harmonies as well as melody. Ironically, this was one of the reasons the accordion was slow to gain acceptance in classical music because the buttons could only produce relatively simple chords. The breakthrough came with the emergence of the “free bass accordion” which could play a wide range of individual bass notes. Accordions are part of a large family of musical instruments known technically as free-reed aerophones and include mouth organs, the ancient Chinese sheng and thai khan. The melodeon, bandoneon and accordion are actually just simplified versions of the accordion.

If Paul Hindemith’s music doesn’t normally float your boat, try this first work. Kammermusic (“Chamber Music”) is the title of eight compositions he wrote in the 1920s. While most German composers of this era wrote romantic nationalist music, Hindemith looked forward rather than backward. back and wanted to explore new tones and new ideas. This strikingly original work is written for wind instruments, piano, string quintet, percussion and accordion. It is strident and provocative music and contains more than a hint of Stravinsky. After the premiere, 27-year-old Hindemith gained a reputation as “music’s bad boy”, a description he likely relished. One reviewer quipped, “the music has finally succeeded in embracing today’s lifestyle at its most frivolous and vulgar…a kind of music like no German composer has ever dared to think, let alone write… music of lust and frivolity.”

For modern ears it’s a delight, with touches of humor, notoriously difficult passages and a wild, snappy energy that’s hard to resist.

Concertos for accordion and orchestra are a little thin on the ground. The first was obviously composed in 1937 and since then only a net has emerged. It seems that few composers have ever felt the need to write one, although there are examples from American composers Alan Hovhaness, Henry Cowell, Paul Creston and British composer Gordon Jacob. The accordion being so closely associated with France, one would think that some French composers would have written a concerto but no one did. But here is a splendid work by Ukrainian composer Ihor Shamo, born in kyiv. The concerto is superbly and sensitively played by the brilliant young Croatian accordionist Leonardo Rojnić who is currently studying at the Sibelius Academy in Helsinki. You will notice that he plays a rather complex instrument that uses buttons instead of a keyboard. It’s known as a bayana type of accordion developed in Russia in the early 20e century and preferred by many professional musicians due to its richer sound color and more powerful bass notes.

The performance was recorded during the Croatian national final of Eurovision Young Musicians 2020. Shamo’s concerto is a fascinating work, accessible and in complete contrast to the work of “bad-boy” Hindemith. The Prelude is composed of simple, flowing melodies, lyrical harmonies and a kind of romantic introspection. It leads to a sparkling and virtuoso Toccata which demonstrates the formidable technical skills of Leonardo Rojnić. Magic indeed.