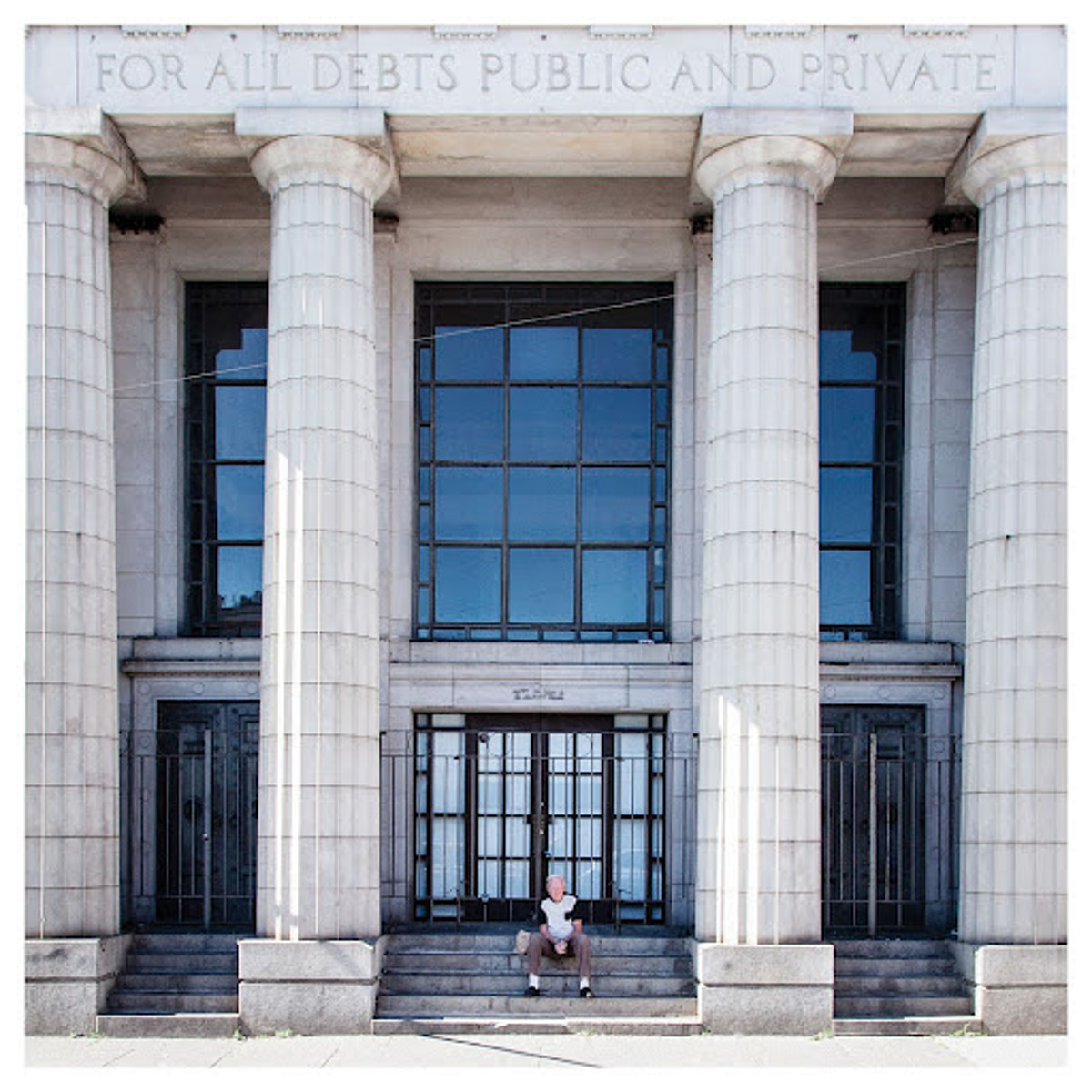 So many artists, so little time. Every week we review a handful of new albums (from all genres), round up even more new music that we’d call “indie” and talk about what metal comes out. We post music news, track premieres and more all day. We are updating a weekly playlist of some of our current favorite tracks. Here is a daily summary with a bunch of interesting and recently released songs in one place.

Chicago underground rapper Defcee has announced a sequel to Messiah Musk produced last year hatch. It’s called For all public and private debts, scheduled for April 19 via Closed Sessions, and this one was produced entirely by another Chicagoan BoatHouse. It has appearances from Armand Hammer, SolarFive, greenSLLLIME, Mother Nature and Kipp Stone, the latter appearing on the big single “Ragnarok”.

EZRA COLLECTIVE – “THE FUNK BE WITH YOU”

Genre-defying British jazz band Ezra Collective return with a new song “May the Funk Be With You,” and as the title suggests, 70s funk vibes are strong on this one.

Aliex Cameron’s new album Oxy Music is out next week and he just shared a new single and video. On “K Hole”, Alex says: “Self-medicating generation. Social groups, broken mirrors pieced together and bound by saliva. Holding hands just to say ‘it’s OK it’s not all okay’. There’s love here and peace, if you’re ok with being alone. We like it together – but there’s only room for one in a K Hole. The video was shot at St. Ann & The Holy Trinity of Brooklyn.

“‘I will never get back what I have lost sight of.’ We had this line written last year, but we could never figure out what to do with it,” Haim write. “We kept writing him, not knowing where he should live. Cut to PTA shooting the director’s number for @wmag with our little sister on the cover! An opportunity arose to do a quick musical component during the filming of the story. Paul mentioned having the book See you in Samarra as possible direction. So we dug into the book and took inspiration from the scene where the main character throws a drink in someone’s face at a country club. We were inspired by the idea of ​​someone doing something so drastic to get out of a situation they felt uncomfortable in – just to feel something. We finally remembered those lyrics and wrote and recorded the song and shot it all in a matter of days! Either way, it was fun to do something very collaborative/improvised.”

Danish post-punks Iceage have taken over Abra’s “Pull Up” R&B jam, which no one expected to happen, but it’s actually pretty good. Iceage retains a bit of groove but appropriates it.

Ex-Vöid, the band consisting of former members Joanna Gruesome, Lan McArdle and Owen Williams, have shared another track from their upcoming debut album. Their vocals sound great together on “No Other Way,” a moldy earworm that Williams says “is about experiencing Stockholm Syndrome in a relationship.” He admits: “I wrote it before I was even in a real long-term relationship, so I think I was just trying to assert my own celibacy. Around the same time, I kept to tell everyone that I was trying to cultivate a mystical asexual relationship’ so who knows what was going on with me Bigger Than Before is out March 25th via Don Giovanni.

Midlake will be back with his debut album a decade later this month and one of the album’s most emotional songs is ‘Noble’, which is named after drummer McKenzie Smith’s son, who was born with a disorder. rare cerebral. “When he was born, they were told that the life expectancy of most children with his disease was between six months and two years. The heavy nature of Noble’s condition and the new reality for my friend and bandmate McKenzie (along with his wife and daughter) weren’t something we took lightly,” says vocalist Eric Pulido. “We were really excited to create this song for him and for Noble, not only to recognize the struggle, but also to celebrate this amazing and beautiful boy. The wonderful news is that over two years later, Noble is still here with us! He’s beaten so many odds already and continues to amaze us and prove to us just how incredibly strong he is. His life is extremely difficult on many levels, so every day we spend with him is a precious gift.

Fred Mascherino, former guitarist/vocalist of Taking Back Sunday and frontman of Breaking Pangea, has announced his first album Color Fred in 15 years, A year and change, due April 1 via Heading East Records. The new single “Creatures” has a late 90s/early 2000s emo vibe and sounds like a throwback to Fred’s pre-TBS roots.

Charli XCX’s new album crash came out this month, and she shared another sneak peek, “Baby,” which she told Zane Lowe on Apple Music 1 is “probably the sexiest song I’ve ever done.”

Atlanta sludge metal band Whores. have confirmed that a new album is coming this year, but first here’s a new single, which is heavy and edgy but still very melodic. They too announced a tour with Bummer and Capra.

Manchester loose articles will publish their chaos EP on July 1 via Alcopop! Records, and the newly released title track has a skeletal post-punk vibe.

Hardcore bands Video Prick (from Seattle) and Raw Breed (from Denver) drop a shared EP on April 15 via Convulse Records, and one song from each is streaming now: Video Prick’s jarring and abrasive “Hate It Here” and that of Raw Breed “Raw Is War” energetic and aggressive.

Haunter, the black/death metal band from Austin, has announced a new album, disembodied evils, due May 6 via Profound Lore. It’s three long songs, and you can now hear about three minutes of the closing track.

Jamaican reggae/dancehall singer Christopher Martin is back with a playful and catchy new single.

Mexican singer Carla Morrison has announced her album of entirely new material in seven years, The Renaissance, scheduled for April 19 via Cosmica (shortly after Coldplay’s Mexican dates opened). It includes recent singles “Ansiedad”, “No Me Llames”, “Obra de Arte” and “Contigo”, the latest of which you can hear below.

Swedes Hater have a new album, Sincere, in May and here is another preview. “Hopes High” is set to a martial groove, part komische and part hazy psyche.

Colpitts is the new solo project of John Colpitts — aka Oneida drummer Kid Millions aka Man Forever — and he’ll be releasing a new album accident music on March 18 via Thrill Jockey. Greg Fox and Noah Hecht (Porches, Fiery Furnaces) play on “Bread” and while you’d expect a track with three drummers to lay down a beat, it’s just synths.

Onetime Pains of Being Pure at Heart frontman Kip Berman is back with a new single from The Natvral which will be released in 7″ on April 26th on Prefect Records. “‘A Portrait of Sylvie Vartan’ is about the appeal and boundaries of self-invention, and the ways we relate — or don’t — across oceans, language, and time,” Kip explains. It is also pancakes and milkshakes.

LIFE hail from Hull UK (home of the Housemartins!) and the city, located in the North East of England, plays an intrinsic role in their style and their third album, Northeastern coastal town. “North East Coastal Town is our love letter to the city. The album is an ode to kinship and relationship with its musical and lyrical spine that selects themes of love, desire, beauty , horror, chaos, pride and above all a sense of belonging It is a work of reflection dedicated to the people and places and those who have always been there and who have made us feel that we belong Check out the new single “Big Moon Lake.”

Sharon Van Etten released a new single “Porta” last month and is now back with another new song. Awash in ethereal synths, “Used to It” was originally written for the 2020 HBO documentary baby god.

Katrina Ford of Celebration and Mt Royal has been quiet for the past few years, but is gearing up to release her first solo album. Disc details are yet to be determined, but she shared a new song today. Dark, cinematic and quietly groovy, “Peace Out” that has Katrina singing “Is there anyone who can follow the rabbit hole?”

METZ frontman Alex Edkins is releasing a solo album under the name Weird Nightmare which will be released on May 20 via Sub pop. “Hooks and melody have always been a big part of my songwriting, but they really became the main focus this time around,” says Alex, who is definitely in more pop territory here.

Swedish stoner doomers Besvärjelsen have announced their second album Atlasdue out 5/27 via Magnetic Eye, and you can read more about the first single “Digerliden” here.

Tool have released “Opiate²”, the nearly ten-minute reworking of the title track from their 1992 EP. Learn more here and pre-order the accompanying Blu-ray/art book here.

Bartees Strange has signed to 4AD and his debut single for the label is the triumphant and anthemic indie rock “Heavy Heart”, which you can read more about here.

Looking for even more new songs? Browse the archive of new songs.

How to Add Your Own Music to Apple Music