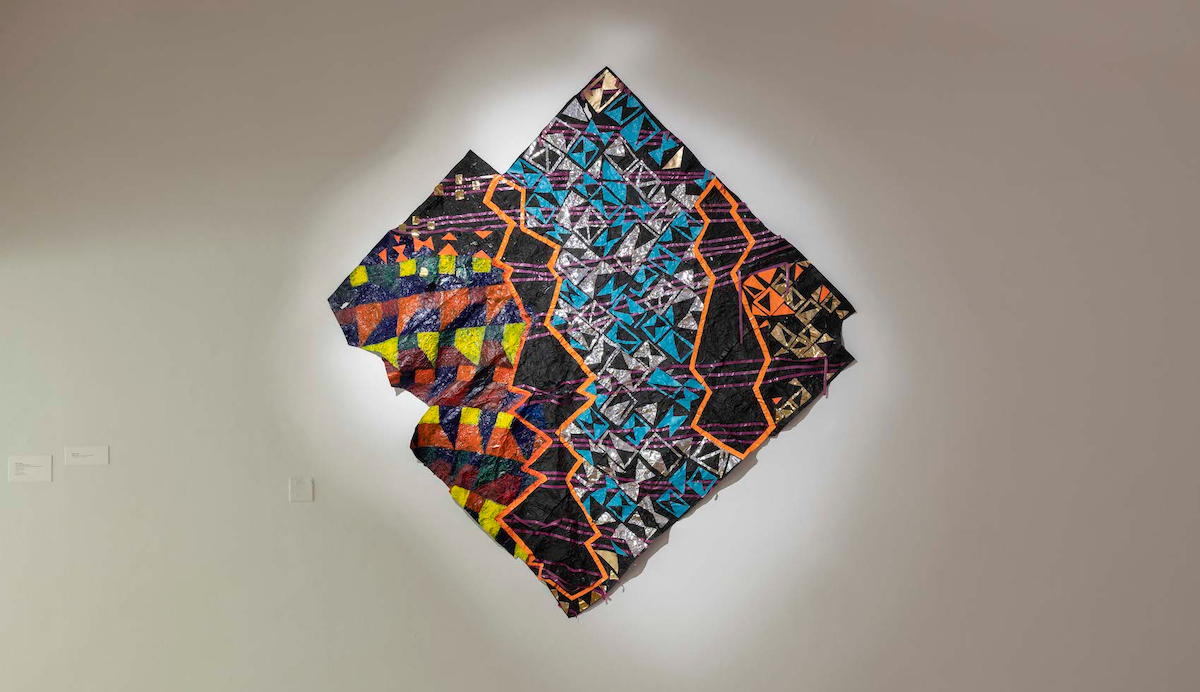 CHICAGO — We all have our artistic weaknesses. Me, I’m a sucker for anything made from found objects. Call it reassignment, appropriation, sampling, borrowing, assemblage, or any of the varieties of collage — photocollage, DIY, take-off. Just maybe not upcycling. Nothing ruins a word like the lifestyle genre.

Anyway, I was wondering if this style of art making might be unique to Chicago, as many of our most exciting local artists owe their materials to the dumpster, or at least the thrift store. Take Theaster Gates, famous for transforming abandoned buildings into cultural spaces, and whose How to sell equipment show at Gray Warehouse last summer involved artfully displaying existing inventory from a South Side True Value store he purchased in its entirety when it went out of business. Consider Jessica Stockholder, who in the past has used old sofas, a freezer, a street lamp, a washing machine, and an automobile, among other things, to construct and support her rambling sculptures. In Specific shapes at Kavi Gupta, which closed in February, she did the impossible: transform broken desktop printers, a bane of office durability, into something aesthetically exciting.

What else have Chicago artists been making brilliant use of lately? Sam Jaffe transformed flashy knitwear (the kind you can no longer call Cosby sweaters) into artful op-art canvases for muscle memory, his March show at 65 Grand. Claire Ashley, Judith Brotman and Cameron Clayborn would send each other materials – from scraps to finished pieces – then incorporate them into the outrageous inflatables and endlessly inventive little builds of mild allergya winter exhibition at the Glass Curtain Gallery.

Reassignment probably isn’t a thing in Chicago, though, if I’m being historically honest. It seems to be a fundamental instinct of makers everywhere and always, from Gee’s Bend Quilters to Robert Rauschenberg, from your kindergarten teacher to the builders of the Arch of Constantine, who incorporated spoiled, fragments of earlier structures, a common practice in Late Antiquity. Local or not, I’ll take the collage wherever I can find it, and right now it’s on the ground floor of the Chicago Cultural Center. Currently on view in a building that once served as the city’s central public library is the exhibit An instrument in the shape of a woman. Named after a line from “Planetarium,” a poem by Adrienne Rich celebrating 18th-century astronomer Caroline Herschel, the show features three mid-career Chicago artists, all creators of resolutely hand-crafted abstractions and colors that sometimes end up in a deceptive charm. stop motion animations. For practical, ethical, aesthetic and other reasons, they all continually reuse their own and others’ creations into new works of art.

Let’s start with Selina Trepp, who provides a free zine outlining the reasons for her decision to stop bringing new material into the studio 10 years ago. This principle has had enviable effects: less money spent, more time saved, aesthetic adjustments, learning new things, less work-related anxiety and ultimately a happier life. His appearance is inexhaustibly delicious and a bit mischievous. There’s a series of ‘Dirty Drawings’, mysterious and surprisingly vivid palimpsests created by leaving old drawings on the floor until they’ve been altered enough by stepping on them, then adding some more. “Utility Piece”, a large diamond from Cinefoil covered in irregular patterns of tape, foil and paint, has been around since 2015 to solve tricky installation situations like an awkward bookshelf or, here, a large blank wall .

Because all places should offer seats for watching videos, but too often Trepp provides their own, made from solid scraps; try to spot the floral painted cardboard that forms the backdrop of “Stage/Seating” in the immersive stop-motion animation projected onto the gallery walls. Declaratively titled “I work with what I have”, it is a whimsical 40-minute loop that could be understood as revealing the secret life of leftover art. What do they do when there are no humans around? Lots of fun, apparently.

Do you know what else is fun? Paint with other people. In 2017, Leslie Baum launched the “Plein Air Project”, inviting friends, colleagues and even strangers to join her on painting appointments in a park, backyard, botanical garden or in another natural space. She saved the resulting watercolors, made photocopies of them, cut them out, and rearranged their blended parts into collage studies for a series of large canvases, 13 of which are on display at the Cultural Center. They are eerie and deeply pleasing images, done in fine luminescent acrylic washes, and they are as much portmanteau landscapes as they are impressionistic recollections of the encounters the people who made the original sketches had in these places, including Baum. In a generous gesture, in terms of sharing inspiration, and helpful in understanding how the project worked, Baum’s paintings hang above a shallow display case that wraps around the gallery and contains dozens of these early sketches to watercolor. A visitor can stop to watch “shape the day: rs, ac and ph” and play the charming game of locating its visual elements – the shape of the broken heart, the staccato marks in shades of blue – in the sketches in full air below. Nothing ever appears exactly as it once was. Instead, it gives rise to something new, and perhaps something else as well.

A Buddhist might call these successions of creation and reuse samsara, the cycle of death and rebirth with which they believe life in the material world is linked. Diane Christiansen, the third artist in the exhibition and an “eternal student of Buddhism”, suggests it in some of her stop-motion animations and paintings, as well as in a bench molded from layers and layers of old drawings. ‘animation. Sit on them and watch what they once were, in videos that are both fierce and funny, dark and light. It’s toons where nothing stays a thing for long: In “Speck,” radiant drops become a planet, grow spindly power poles that turn into biting alligator jaws, turn gray and flat and brushy, and then host a farm. who transforms into a giant, watery-eyed toad, which spits out a galaxy of rainbow spots. (There is also a walking vaginal hand, but it is an independent figure.) So are Christiansen’s small plaster paintings, with their patina of erasing and reworking, repairing and graffiti, their sense of be fragments of frescoes or tiles. The casts are sometimes also used as animation images, and one even found himself embedded in a large flamboyant red painting on paper titled “The Last Days of Capitalism”. After so much reassignment and continuation, it seems the end is near. Have we finally reached nirvana? If only!

An instrument in the shape of a woman continues at the Chicago Cultural Center (78 East Washington Street, Chicago, Illinois) through September 4. The exhibition was curated by Annie Morse.