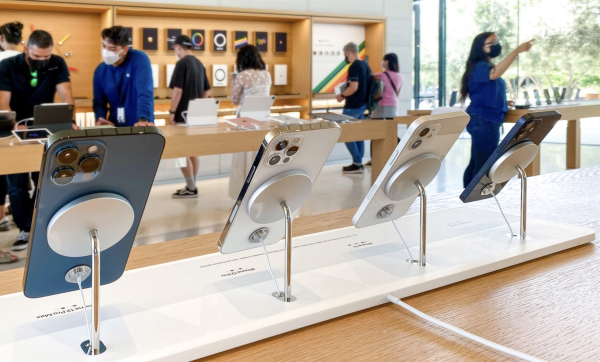 Last summer, Apple showed off a new iPhone display unit with a MagSafe booth at the Apple Park Visitor Center in Cupertino, as featured in our cover graphic. The concept was to be tested before Apple Stores in the United States and beyond adopted the new retail store display units. Although my local store has not used these new brackets yet, maybe your local store does. Yesterday, the Hong Kong Patent Office granted Apple a design patent for the new iPhone stand. Additionally, our report covers two new trademark filings related to business and music.

Unlike “patent applications” which provide the public with a summary, summary and details of an invention, design patents published worldwide are limited to providing the public only with design patent numbers. No additional design specifics are available.

Below are three groups of design patent figures of the new stand with MagSafe. As you will notice below, the design patent illustrates individual stands versus using an iPhone grouping “lift” stands, as featured in our cover graphic.

In other Apple intellectual property (IP) news, Apple filed two new trademarks earlier this month. The first trademark was registered in the United States for “Apple Messages for Business” under number 97274998, as shown in part below.

Apple has registered this trademark under the international classes 038 and 042 as presented below:

The US Patent Office defines a “Specimen” mark as an example of how a company actually uses its mark in the marketplace with the goods or services in its application. This is what the public sees when they consider purchasing goods or subscribing to services provided by Apple in connection with its brand.

Apple’s trademark specimen for “Apple Messages for Business” is extraordinarily detailed. Below is a Scribd document of the complete specimen provided by Apple to the USPTO.