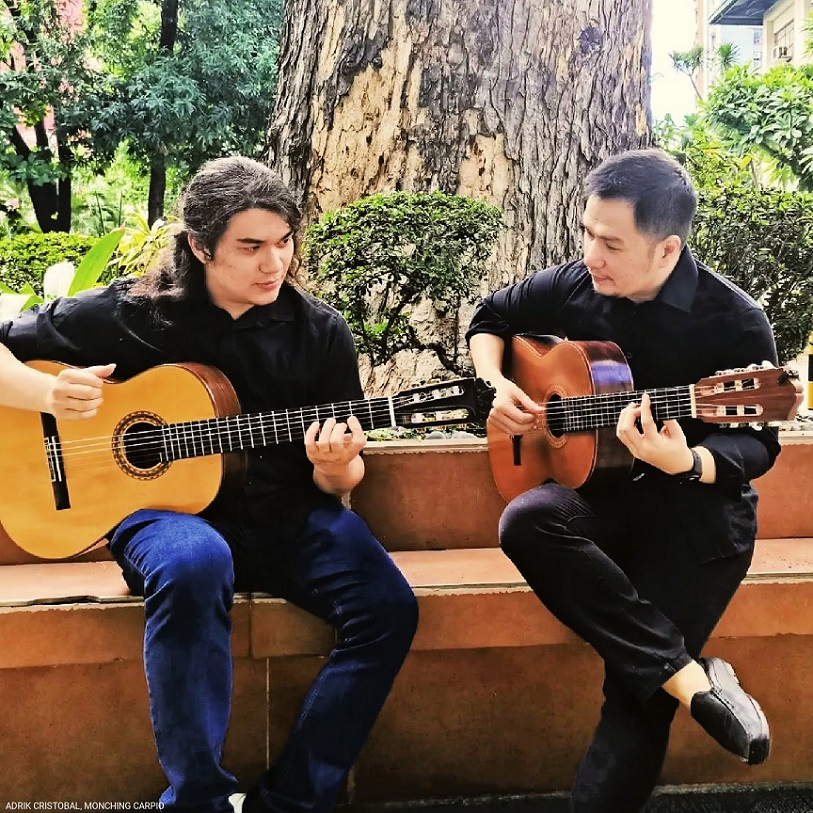 On the one hand, Carpio interprets Francisco Tarrega’s supremely haunting Capricho Arabe while Cristobal revisits the Alhambra through Recuerdos de la Alhambra by the same composer which is also the soundtrack to the immensely popular K-drama of the same title featuring the hugely popular idol Hyung Bin.

Having studied at the Seville Conservatory, Cristobal said he had personally visited the Alhambra in Spain and could therefore identify with it immediately. “The piece is one of the most popular in the classical guitar repertoire and I understand why. I experienced first hand the scenery Tarrega saw as he walked through the Alhambra Palace in Granada. Some people express themselves through words, some through painting, and some through music, just like Tarrega did after seeing the Palace for the first time.

It was timely for Carpio to work on his Spanish repertoire and the musical collaboration took place. “He (Carpio) asked me if I wanted to work on a project together since I also had a lot of Spanish pieces under my belt. We finally decided to make it a live event. Working with him is always a privilege.

Cristobal admits to having started the classical guitar quite late at 12 years old. “It was after a few years of electric guitar. I don’t think anyone directly inspired me but I was getting curious about the classical side of the guitar. I ended up discovering different guitarists. I slowly learned more about their individual unique style.

His first five years as a classical guitarist were quite intensive as he was homeschooled in high school. “I was with Professor Lester Demetillo during my early years and learned a lot about music in general. He was one of my first inspirations to pursue guitar in college and eventually join the UP guitar orchestra which he leads to this day. I enjoyed and learned a lot from our time together.

He admired many classical guitarists, but the most influential for him were his two main teachers abroad – Francisco Bernier at the Conservatory of Seville and Carlo Marchione of the Conservatorium Maastricht in the Netherlands. “I also had the privilege of taking private lessons with Cuban guitarist Marco Tamayo. In addition to their excellent playing, learning from their distinct styles has helped me build my own style. Each offered a lot of information that I needed at the time. Bernier helped me enormously to improve my technique. In the process, I found my sound and character as a player. He also helped me soak up a more Spanish style of play, which is what I wanted to be. Marchione deepened my view of music as a whole and showed me how to play baroque and classical music on a more stylistic level. Marco Tamayo on the other hand helped me refine my playing as a whole and simplified the approach to learning songs. Japanese maestro Shin-ichi Fukuda also shared very insightful knowledge during my encounters with him at masterclasses. and social gathering. In my opinion, his style of playing represents not only the Japanese guitarist but also the Asian guitarist that I am proud to be.

He knows that the guitar itself is a very flexible instrument and has its advantages. “It’s classical yes, but not as ‘rigidly’ classical compared to orchestral instruments. Careful selection of repertoire that can reach a wider audience makes me stick to creating music and hopefully get my financial reward later.

Cristobal is realistic about the state of classical guitar appreciation in this country. “Obviously covid has hurt everyone and taken a toll on all of our lives. Although enrollment has been lower, I believe there are more quality students now. As for events, I think we have to wait until public events/gatherings are probably nearing 100% capacity. »

He is happy to have found the same people supporting the small guitar community and he hopes it will grow.

The pandemic period from 2020 to 2021 found it in the Netherlands. “With limited performances and activities, I was able to think of another way of doing things. I hosted online concerts with various themes and guest artists. Luckily, thanks to people searching for content online and with the help of my family and friends, we were able to reach quite a large audience. Fortunately, each performance was also financially rewarding. We also experimented with audiovisual effects during the production of the concerts. With the changing times now and the transition to live performances, I hope we can bring the same concept live.

The long confinement also revealed the chef in him with his very personal chicken recipe. “Aside from my interest in classical guitar, I’d like to think I was cooking one of the best fried chicken recipes that has ever hit the small town of Maastricht, the Netherlands. It was never a real business, but in a small town with very few food choices, my hobby kept me busy as many students and families were ordering. I’m working on bringing it to Manila on a larger scale in the future.

With several duet numbers on the program, Cristobal reveals the adaptation that takes time to develop. “The player’s impulse is usually to go fast. But when you play as a duo, you have to learn to synchronize. The main difference from playing solo is to focus more on yourself, which can be a little more difficult since you are mainly responsible for yourself. But when playing as a duo, you have to be responsible for each other. Collaborations are more enjoyable because of the learning process you share and gain from each other. »